Learn how to use Runeterra’s coolest champion, Ashe. 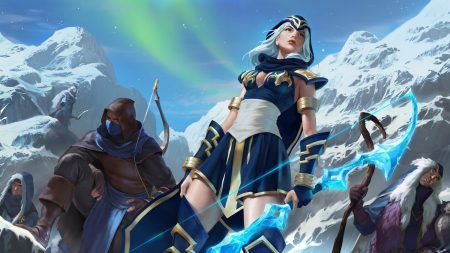 Legends of Runeterra is a complex trading card game that has players mixing and matching units from various regions of Runeterra.

If you’re new to the game, check out our complete beginners guide here, which will get you started with some essential tips and strategies.

In this guide, we’ll teach you how to win with a Freljord build, one of the best starter regions in the game.

Your defense is the best offense

Freljord is known to have some of the tankiest units in the game. With this synergy, your goal is to sustain your defenses before you can go on a full-out attack later when your heroes are ready to go.

With Freljord’s heroes costing a pretty penny, you must focus on putting your toughest, yet most basic cards on the board. These include:

These units are perfect for setting up a strong frontline when you’re drawing for champions. The yearling’s Last Breath shuffles a 1-cost 5/5 Yeti into your deck, buffing up your late-game attacks. Ruthless Raider has attributes of Overwhelm and Tough, giving other 1-3 cost units a risky attack.

Though only costing 3 gold, Braum is able to challenge enemies with little to no risk due to his 5-health regeneration, but he is an easy kill if your opponent has attack spells to use.

Focus on your freezing abilities

Freljord’s best specialty is Frostbite. When a target is Frostbitten, its attack power is reduced to zero for the remainder of the round.

With Frostbite, you take your opponent’s chances of dealing damage away and give yourself the opportunity to chip away at higher-level cards. Cards that give the best Frostbite include:

Your main component in this freezing frenzy is Ashe. Once you’ve initiated frostbite five times, your Ashe will level up and, once on the board, will grant you an Enchanted Arrow that will stop frostbitten enemies from blocking your attacks. This will be the quickest way to a mid-game finish if you have a fully occupied board.

As for your non-champion freezers, Icevale Archer (2-cost) instantly freezes a unit in play while the more expensive unit, Rimetusk Shaman (5), will grant freezes to the strongest enemy at round start.

Brittle Steel and Flash Freeze are burst spells that can save your Ashe and other important units from dying. These spells are perfect for surprising your enemy with a mid-attack level-up on Ashe.

Though Freljord by itself is already a substantial deck, you can add other regions to bolster its offensive and defensive capabilities.

Demacia’s bread and butter are Challenger cards. This specific card-type (identified by the hook) allows players to pick their opponents in battle, either giving you a deadly strike on the enemy or providing your more important Freljord units with a free attack. The most viable Challenger cards are:

Ionia also works well with Freljord due to its wide array of Elusive cards and defensive spells. Elusive units (identified by the crossed-out eye) can attack freely since it can only be blocked by Elusive units. Ionia will be a perfect synergy if you’re going against non-Elusive decks like Noxus and Shadow Isles. The most viable Ionia cards are:

Your Frostbite deck will have some trouble going against aggressive summoning and drawing decks like Shadow Isles, Ionia, and Bilgewater. With your reliance on Frostbite effects, you should have late-game cards like Winter’s Breath and Icy Yeti that will likely freeze more than half the board. These cards will also guarantee an all-out attack from Ashe and your summoned cards.

Make sure to always protect your Ashe by any means. She will be your only hope in winning against strong late-game comps with her non-block skill. You can fill your deck with defensive spells like Health Potion and Elixir of Iron for quick fixes to your opponent’s attacking spells on her.

We hope that this Frostbite guide will give you a brief understanding of how to go about creating Freljord decks. There are still many more heroes in Freljord such as Tryndamere and Anivia so don’t be afraid to go above and beyond with the frosty region.