She’s been played 83 times so far, but only once at top. 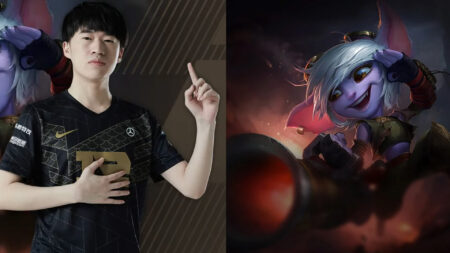 Untouched in League of Legends Season 11, Tristana has been growing in priority in pro play after Samira and Kai’Sa were nerfed in recent patches. Picked in bot lane a total of 72 times across major leagues this Spring 2021, she has a 56.9% win rate.

In another ten occasions, she was played in the mid lane as her abilities naturally allow her to waveclear, even against mages. She’s also able to assert kill pressure with the jungler due to her burst damage in the early levels.

So when Tristana was locked in by Royal Never Give Up after Xayah and Viktor were picked, everyone was stumped. If Tristana was going mid, was Viktor being displaced to top? How about Gragas? Will he be played as a tank at top, or flexed to support?

In the high stakes LPL Super Weekend, this match between Royal Never Give Up and Edward Gaming determined which team took first place in the league. Tied with a 9-1 record, these are two of the biggest organizations in LPL that have finally regained their stature after years of slumping.

Once players made their swaps, it became clear that Li “Xiaohu” Yuan-Hao would be the one playing Tristana in the top lane for the first time this Spring. Bear in mind it’s also Xiaohu’s first split as a top laner after making the switch from mid as he enters new territory.

Using his range advantage against Li “Flandre” Xuan-Jun’s Gnar, Royal Neve Give Up made sure to set him up for success. Leading by more than 40 CS, Xiaohu was up in kills, turrets, and of course, up in gold. Yan “Wei” Yang-Wei’s Hecarim showed up thrice at top to snowball his lead during the laning phase.

By mid game, Xiaohu had three completed items on Tristana — Galeforce, Infinity Edge, and Phantom Dancer. He actively looked for opportunities to teleport bot as RNG continued to work the map in their favor to secure objectives. They avoided full on 5-on-5 team fights, preferring to manipulate minion waves and punish EDG for overstepping.

In less than 25 minutes, RNG with Baron buff turned around one last fight in EDG’s base to take the lead in the series. Even though they lost game two, Xiaohu’s Gnar led the charge again in game three for a decisive victory.

Defeating EDG 2-1, RNG cemented their number one spot in the league as Xiaohu nabbed both MVPs.

Will we see Invictus Gaming’s Kang “TheShy” Seung-lok pull out an AD carry at top lane too?