Why Reapered and Abbedagge are clear upgrades for 100 Thieves 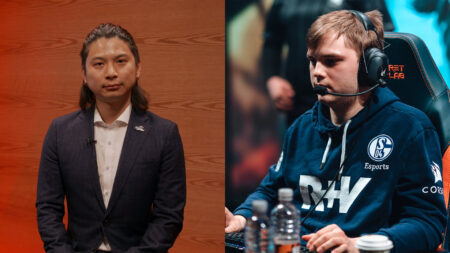 100 Thieves are looking to improve their standings in the Summer with the signing of EU mid laner Felix “Abbedagge” Braun and veteran coach Bok “Reapered” Han-gyu.

Abbedagge had a strong presence with Schalke 04 in 2021 LEC Spring. He ranked second in kill participation (70.2%) and fourth in overall kills (55) among LEC mid laners.

However, his individual efforts did not always translate to the team’s overall success. S04 failed to make a difference in the Spring Playoffs, finishing fourth after a hard-fought series against Rogue.

With 100 Thieves as new age LCS contenders, Abbedagge brings his consistent playmaking into their mid lane, which is currently one of the weaker aspects of the team.

In the previous season, 100T fielded Tanner “Damonte” Damonte throughout the regular season, and eventually subbed in Tommy “ry0ma” Le towards the postseason. Though ry0ma brought a fresh approach to the mid lane, 100T took tough losses against Cloud9 and TSM, and finished fourth at the Mid-Season Showdown.

100T general manager Christopher “PapaSmithy” Smith officially announced that Abbedagge will be starting in Summer. From his recent LEC appearances, the 21-year-old looks like he has what it takes to contest the league’s famed mid lane imports, and be a central pillar for the 100T squad.

“This is a player who we think will be able to elevate us to the next level and be our starting mid laner in the LCS for years to come,” said PapaSmithy.

For those wondering about the LCS import rule, 100T top laner Kim “Ssumday” Chan-ho recently got his green card, and is therefore an NA resident. This opened up a slot for Abbedagge, the team’s second import player.

As for Reapered, the former C9 coach is a substantial upgrade for the rising LCS team. Though he went off the grid during Spring, his four-year career at C9 showcased his abilities to lead a team, clocking in four back-to-back Worlds appearances and a 2020 Spring Championship.

“I do believe that coaching itself is not just teaching them how to play the game,” said Reapered. “It’s more like giving them a little bit of freedom to do whatever they want to try, making sure they reach their highest potential as a player, and then maintaining that. That’s my job.”

He added that he chose 100 Thieves because the org’s philosophies on improvement and management resonated with him. Furthermore, he saw it as a good challenge to develop a team that is currently performing well in the LCS.

In Spring, the squad managed to take a win from TL, but conceded two losses to both C9 and TSM. Under Reapered’s wing, 100T will likely find ways to topple league leaders C9, Team Liquid, and TSM in Summer.

PapaSmithy views the big offseason as a way to reassure fans of the org’s direction. Though the team was just one series away from placing in the top 3 at MSS, 100 Thieves will return in the Summer season with their eyes set on Summer Playoffs, and ultimately Worlds 2021.

Now that LCS regular season records are retained across both splits, 100 Thieves will start Summer in fourth place with an 11-7 record.