This game was a rollercoaster ride from start to finish. 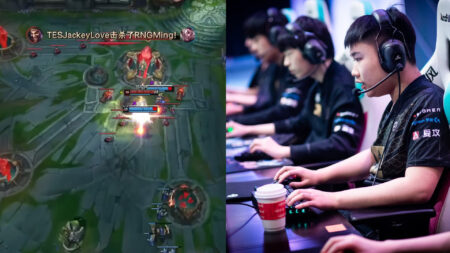 Credit: Royal Never Give Up, screenshot by Amanda Tan/ONE Esports

An intense LPL Spring playoffs Round 4 Lower Bracket best-of-5 series between Royal Never Give Up and TOP Esports came down to a final do-or-die game five.

Prioritizing Xiaohu’s immense carry potential, Royal Never Give Up were quick to pick up Lucian. Not to be outdone, Top Esports made an equally bold move by locking in Yu “JackeyLove” Wen-Bo‘s trademark champion, Draven.

Both teams balanced their team compositions well, with late game wave clear mages in mid, initiating supports, and front line junglers. The biggest difference lay in the fact that Royal Never Give Up were working with two AD carries instead of just one.

With the game underway, both sides went full throttle with Top Esports playing towards JackeyLove’s strong early game Draven, and controlling every dragon, securing the Ocean Soul 22 minutes in.

It was this single tower trade that foreshadowed the outcome of the series.

The moment Top Esports turned their attention to Baron at the 28th minute, Royal Never Give Up had already sent Lucian and Kai’Sa to the bot lane.

Not only did they make full use of their high attack speed and damage, Yan “Wei” Yang-Wei even managed to steal Baron, which allowed his AD carries to tear through the remaining bot lane tower, inhibitor, and Nexus.

However, in this first backdoor attempt, Chen “GALA” Wei made a crucial mistake. He dived Zhuo “knight” Ding’s Orianna, who went golden, and completely stopped attacking the tower for two precious seconds.

As a result, the Nexus was only two hits away from exploding.

After even more back-and-forth tussles and steals from Wei, the second Elder Dragon spawned. 42 minutes in, both teams grouped around the big objective.

It was in that moment that Royal Never Give Up pulled off one of the most intelligent 500IQ cross-map pressure plays in League of Legends history.

First, Bai “369” Jia-Hao left bot lane to join his team at Dragon, then Xiaohu and Cryin channeled double teleports onto their pushing bot lane minions. Simultaneously, the remaining Royal Never Give Up members went to work to stop Top Esports from recalling, sacrificing their lives in the process.

Even though 369 managed to complete his teleport, Cryin’s Emperor’s Divide ultimate created some distance and bought time for Xiaohu to finish off the Nexus.

Fans, casters, and the players experienced a rollercoaster ride throughout game five, evidenced by the gold graph. Arguably the best team in the LPL at manipulating map pressure, Royal Never Give Up’s incredible backdoor is truly one for the history books.