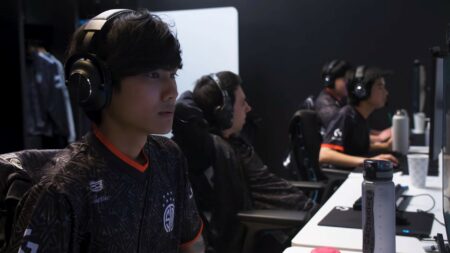 TSM picks up an impressive win in the second week of the LCS Mid-Season Showdown with an all-star showing — in the bottom alcove on Summoner’s Rift.

With TSM only a game away from winning the series, the squad did their best to offset Evil Geniuses’ gold and kill lead with dragon control. As Mingyi “Spica” Lu secured their third drake, both teams clashed in the river.

EG looked to have a stronger hold on the team fight after a quick pick on Heo “Huni” Seung-hoon’s Camille, but the rest of TSM immediately traded it by locking down and eliminating Daniele “Jiizuke” Di Mauro’s Neeko.

Still even on both sides, the EG squad was ready to corner TSM in the bottom alcove. Matthew “Deftly” Chen’s Kai’Sa flashed in to close the distance, but Hu “SwordArt” Shuo-Chieh’s Alistar instinctively headbutted the EG ADC out of the fight.

Even though Dennis “Svenskeren” Johnsen’s Lillia tried to assist IgNar, Spica’s Udyr deleted the enemy jungler with a stun and a handful of auto attacks before joining the rest to take out IgNar.

To close out the fight, Lost’s Tristana followed up on SwordArt’s elaborate Headbutt-Pulverize combo and kited the remaining enemy champions for a double kill and the ace.

Despite being behind in gold and kills, the alcove outplay granted TSM the gold lead and a free Baron, which helped secure the 3-1 victory, eliminating EG in the process.

TSM advances the lower bracket of the LCS Mid-Season Showdown, and will face 100 Thieves on April 5, 4 a.m. GMT+8.