This Tryndamere mid build is shaking up the Worlds meta 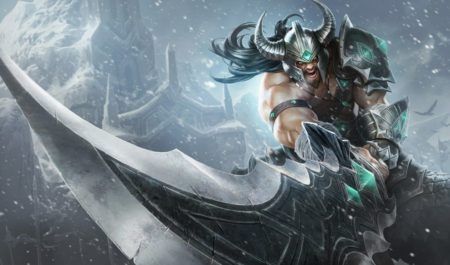 Still climbing solo queue on this bruiser, Nemesis has racked up 133 games on him in mid lane, his second most played champion, and amassed a 57% win rate.

Why is Tryndamere mid viable in the current League of Legends Worlds meta?

The key reason why Tryndamere mid has risen in the meta is because bruiser items are outperforming mage items. The League of Legends preseason 11 has not been kind to this class of champions.

“Mage itemization sucks, it’s terrible,” said Team Liquid content creator Drew “Midbeast” Timbs in his VOD review of Nemesis. “These mages like the Viktor, the Syndra, the Orianna… take you 20, 25 minutes to become relevant unless you snowball.”

The combined power of Goredrinker and bruisers

Goredrinker has been the highlight of Season 11, built by many different types of champions in top, jungle, and now in mid lane. Immediately in the first League of Legends patch 11.1 of the year, Riot Games reduced its Thirsting Slash damage and healing.

On a champion like Tryndamere, who heals 1% of his missing health from Bloodlust (Q), and who possesses an Undying Rage ultimate that prevents his health from being reduced, Goredrinker’s active and passive compounds his ability to sustain.

Paired with Precision and Resolve runes, Tryndamere’s sustainability increases further. Second Wind, which lets you regenerate some health after taking damage from an enemy, and Revitalize, which improves shield and heal power, are crucial in the laning phase.

For these reasons, AD bruisers are stronger in the early to mid game, especially against mages in the mid lane.

Tryndamere mid build: How the pros are itemizing and playing this champion

Notable pro players such as T1’s Lee “Faker” Sang-hyeok and Hanwha Life’s Jeong “Chovy” Ji-hoon from the LCK, and LNG Esports’ Xie “icon” Tian-Yu and FunPlus Phoenix’s Kim “Doinb” Tae-sang from LPL, have all been putting in EUW solo queue games on this champion in the mid lane.

Doinb already picked up Tryndamere mid after the 2021 LPL Summer Split concluded, playing in on stream. In early September, he predicted that this champion will be played and banned at Worlds 2021, and is stronger than Lee Sin.

While most pros tend to prefer the standard Goredrinker build, Nemesis, the pioneer himself, recently started to change it up by opting for Galeforce as a Mythic item instead to gap close, and slow enemy champions even more with Serylda’s Grudge.

Remember to swap out your Summoner Spells, for Flash and Ghost are best on Tryndamere — not Teleport — for he likes to push himself straight into enemies’ faces.

As Midbeast explains, “He spins into the middle of the team, and then he just sustains… You just tank everything. If you don’t focus Tryndamere, you die. If you focus Tryndamere he heals, and then pops ultimate. There’s not many good options to counter this.”

READ MORE: The 5 best top laners to watch out for at Worlds 2021