Put it in the record books. 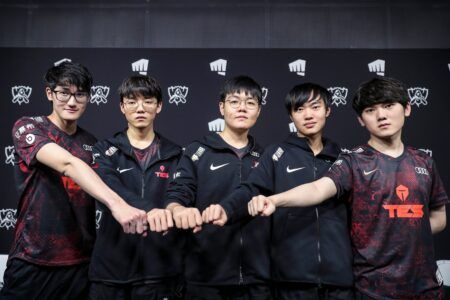 It looked like it was all over when Fnatic raced out to a 2-0 lead, but Top Esports managed to fight back, winning the next three in a row to secure the first-ever reverse sweep in Worlds history.

Fnatic looked dominant in game one as they raced out of the gates in the first match of the series.

Hylissang’s baby-sitting hours paid off as Rekkles ended the game with a deathless K/D/A and a whopping 93.3% kill participation which granted Fnatic the boost they needed to win game one.

The European team kept up the momentum in game two with clean play and flawless team fight execution.

Once again, Hylissang nailed it with his flanks and peel as Braum. In this mid-game teamfight, Fnatic traded a kill on Hylissang but won the clash as they took down four of TES’ members, leaving only Jackeylove’s Senna the last man standing.

TES never even had the opportunity to redeem themselves as Fnatic forced a matchpoint to end the series.

With their tournament lives on the line, Top Esports finally woke up in game three, starting with a solo-kill on Bwipo’s Ornn that snowballed into an ideal situation for TES. TES took down two turrets from Fnatic even without using the help of the Rift Herald.

Jackeylove’s Ezreal clapped back and dealt the highest damage to champions with a total of 24, 400 damage as TES took game three.

For the first 20 minutes, the game looked very much in favor of Fnatic. However, TES managed to turn it around by letting Bai “369” Jia-Hao’s Sion beef up and enabling Hung “Karsa” Hau-hsuan’s Nidalee deliver a monster performance.

Next to Zhuo “Knight” Ding’s Jayce, Karsa’s Nidalee owned up the second-highest amount of damage percentage in TES with 25.3% or 647 damage per minute.

With Fnatic unable to finish off TES, things were starting to look dire for the European squad, while on the other hand, TES were playing with confidence and conviction.

In the draft, TES exploited Fnatic’s weaknesses by playing sustain compositions with Karsa’s Lee Sin pick proving instrumental in the final game of the series. He played like an absolute beast, bringing out a champion that was considered as a troll pick in the Worlds meta and yet still making the most out of it with a 4/1/6 K/D/A.

TOP Esports ended Fnatic’s Worlds 2020 run and will move on to the semifinals where they will face fellow LPL team, Suning Gaming.

Karsa has never made it past the Worlds quarterfinals in his previous runs, but now he will be facing one of his good friends in former Flash Wolves co-member Hu “SwordArt” Shuo-Chieh.

Fans are quite excited to see how Top Esports’ Jackeylove and Suning’s Tang “huanfeng” Huan-Feng will hold up in the bot lane this Sunday, October 25 at 6 p.m. GMT+8.