The Cup was an amazing showcase of the best teams in China and Korea. 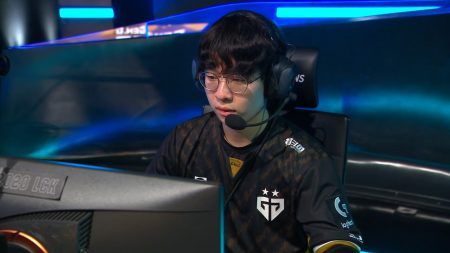 Top Esports may have conquered the LPL-LPK Mid-Season Cup, but there were plenty of stellar plays from the rest of the tournament.

Here’s a rundown of the top five.

JD Gaming pulled off an incredible outplay against the 2019 World Champions, stalling their opponent’s inevitable takeover. In the play, JDG went all-in in a 4v5 situation near the Baron pit.

While Seo “Kanavi” Jin-hyeok circled around the wall of Baron, the Lee-Sin player performed an incredible launch of Lin “Lwx” Wei-Xiang into the rest of JDG for the instant delete.

Even now on both sides, FPX and JDG went straight for the low-life Baron, with Zeng “Yagao” Qi securing the monster with Syndra’s Q. On top of the Baron steal, Zhang “Zoom” Xing-Ra also took out an overextending Thresh in the river.

4. Zoom picks up a first blood solo-kill on Khan

JDG’s’ Zoom was an ice-cold killer in the toplane.

Going up against FPX’s Kim “Khan” Dong-ha, the Wukong player countered Khan’s overextension with an instantly upgraded ultimate at level 6. Though Khan was already looking for an escape due to the level deficit, Zoom popped his Cyclone and burned through his opponent’s health, picking up a well-earned first blood solo-kill.

3. IG bites back with a quadra kill on Gen.G

Despite having a short appearance in the Cup, Invictus Gaming outclassed Korean superteam Gen.G during their Baron efforts.

With Gen.G ultimately deciding to quit on the epic monster, the Korean team rushed the zoning IG for a quick kill or two. Unfortunately, their reckless engage turned into an amazing ace for IG, with Ding “Puff” Wang getting a quadra kill.

One of the LCK’s most proficient midlaners, Gwak “Bdd” Bo-seong, showed what top Korean gameplay looked like with his Azir skills.

In their match against JDG, the Korean team was running low on life due to Miss Fortune’s shredding Bullet Time. With Kim “Rascal” Kwang-hee diving deep to pierce JDG’s frontline, Bdd immediately followed with a swarm of sand soldiers and a flash-Emperor’s Charge that knocked up four JDG members.

The rest of Gen.G came to arms and tanked some damage as Bdd went to town with his sand army, claiming a quadra kill over JDG.

Although Top Esports reigned victorious in the final series, FPX fought their hardest to keep themselves in the running. In this highlight play, FPX showed their prowess with lightning-fast rallies.

After an incredible flash-hook by Crisp that led to a kill, FPX immediately zoned out TES to claim the Cloud Drake. Eager to keep FPX engaged, TES grouped up and charged at FPX’s tanks, Liu “Crisp” Qing-song and Kim “Doinb” Tae-sang.

Though things were looking bleak for the lone frontline, Khan came to the rescue with a Divine Judgement cast on Crisp. With the ult, Crisp became invincible and dealt some insane damage to the attacking TES members, granting FPX with an easy three kills in the bot jungle.