Only one play could beat Bjergsen’s backdoor against FlyQuest to the top spot. 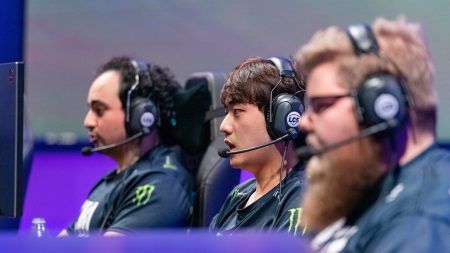 Cloud9 may have dominated the LCS Spring Playoffs, but there were plenty of top plays from the other teams in North America.

Here’s a look back at the top five plays from the 2020 LCS Spring Playoffs.

5. FlyQuest responds with a 4-0 team fight

Though they may have lost against Cloud9 in the Final, FlyQuest had some incredible plays throughout the postseason.

In this highlight play, FlyQuest had a successful Call of the Forge God counter to Evil Geniuses’ tower dive, getting an early kill on Bae “Bang” Jun-sik.

With Jason “WildTurtle” Tran hunting down Tristan “Zeyzal” Stidam near the bot lane, the rest of FlyQuest dove deep into turret-range to secure two more kills with no casualties.

Despite their early exit from the playoffs, 100 Thieves had their fair share of great fights in their series against Team SoloMid.

To get the map advantage, 100 Thieves quickly secured the Ocean drake in the midst of some crossfire. With Sergen “Broken Blade” Çelik attempting to flank 100T from behind and steal the dragon, the team ganged up on the TSM member for their starting kill.

With the 4v5 advantage, 100 Thieves chased TSM into their top jungle, claiming two more kills with an incredible Shockwave wombo combo by William “Meteos” Hartman and Tommy “Ryoma” Le. With the powerplay, 100 Thieves had enough time to eliminate Baron for the late-game buff.

3. Licorice gets a triple kill on FlyQuest

Eric “Licorice” Ritchie made an incredible counter-play against FlyQuest in the top lane. Though the top laner’s teleport was too late to save Yasin “Nisqy” Dincer, Licorice immediately clobbered the diving FLY members.

His Showstopper first killed Tristan “PowerOfEvil” Schrage, and then with some crowd-control coming from Philippe “Vulcan” Laflamme and Jesper “Zven” Svenningsen, he was able to complete the triple-kill to avenge his fallen teammate.

Team SoloMid proved once again that their veteran line-up is built for amazing clutch plays. The team successfully thwarted a five-man rush in the mid-lane, punishing three FlyQuest members in the defensive effort.

Even with the two remaining opponents still trying to engage TSM, Bjergsen teleported into FLY’s base with a group of minions ready, singlehandedly clearing out both turrets and the Nexus.

1. Evil Geniuses close out the game with a double ult backdoor

Evil Geniuses outsmarted FlyQuest in this series-defining play. With half of Evil Geniuses starting to congregate at Baron, FlyQuest quickly caught up to have a chance at stealing the buff. Though it may seem that Baron was hosting a full EG team, Daniele “Jiizuke” Di Mauro and Dennis “Svenskeren” Johnsen were hiding at the bot side for an opening.

With no one left inside the base, the two hidden players initiated a double-ultimate, landing right in front of the Nexus turrets. The two were just a hit away from securing the Nexus, but Colin “Solo” Earnest and WildTurtle managed to take them down.

However, the three other EG members pinned down the rest of FLY in the jungle. With a 2v3 advantage inside the base, Zeyzal sprinted past Solo and WildTurtle and destroyed the Nexus with Sett’s trademark punch-combo.