“Life can come back, once the earth is turned.” 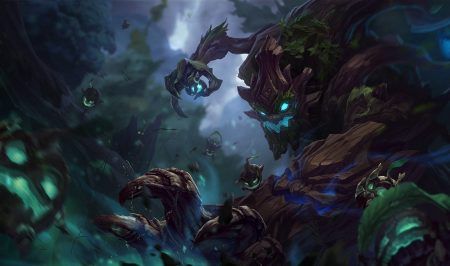 It’s the 50th anniversary of Earth Day today and to show our appreciation for nature, we’re celebrating with a look at the top 5 plays for Maokai, League of Legends very own tree champion, from this season’s LPL Spring Split.

A peaceful nature spirit who once lived in an idyllic, flourishing forest, he now battles against the scourge of the Shadow Isles in an attempt to restore his home to its former glory.

Maokai has been a regular appearance in this season’s LPL Spring Split, rising in popularity after tank items were buffed earlier in the year. As a champion he is easy to play, but when it comes to team fighting, timing and coordination are everything.

This is the first game that Maokai was picked in pro play this season. eStar’s top laner Yang “Xiaobai” Zhong-He used him to great effect against a reckless Invictus Gaming who dived in between two turrets.

After a perfectly timed teleport, Xiaobai swooped in with Nature’s Grasp, rooting all three remaining members of iG, punishing them hard.

LGD looked like they were going to back off after securing Rift Herald, but it was a long con. The moment Xie “icon” Tian-Yu Guo overstepped, “Lies” Hao-Tian flashed in to root LeBlanc.

This gave him a perfect angle to cast Nature’s Grasp which completely caught OMG out of position, turning the fight around for his team.

With Baron buff, Top Esports were looking to end the game. As eStar retreated into their base, Bai “369” Jia-Hao landed a perfect diagonally-angled Nature’s Grasp, preventing any chance of retreat.

To secure the ace, he even Twisted Advanced onto a minion in order to reach Aphelios. What a bold initiator.

In the fight that ended all fights, Zhang “Zoom” Xing-Ran was incredibly patient on Maokai. His one ultimate completely isolated Miss Fortune from Dominus Esports. Not only that, take a look at his target selection – he chose to clam down on Rakan to prevent him from jumping onto his team’s back line.

Finding a key opening, JD Gaming closed out the series 2-0 against DMO.

Another play that proves that patience is the key to playing Maokai, Xie “Langx” Zhen-Ying held onto his ultimate until after Kindred’s Lamb Respite expired.

Seeing Ezreal feeling towards his support, Langx flashed in and followed up with Bramble Smash to prevent any chance of Devour. With a sliver of health, Ezreal could not escape as Royal Never Give Up layered their spells perfectly.