It’s time to honor your support. 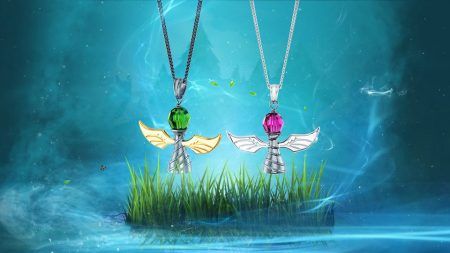 The newest additions to the Riot Games merchandise store are stunning in more ways than one.

In collaboration with RockLove Jewelry, a premium jewelry maker based in New York City, Riot has released two special edition necklaces — The RockLove Stealth Ward Necklace and RockLove Vision Ward Necklace, perfect for you and your significant other.

These necklaces pay homage to the original design of League of Legends’ wards that were first released with the game ten years ago, and bring back a load of nostalgia.

A fundamental part of LoL game play, Stealth Wards provided vision in Fog of War, and gave crucial enemy intel to players. Vision Wards allowed players to see invisible units around an area, and were the key to clearing Stealth Wards (and annoying Teemo mushrooms).

According to the Riot Games merch store, these beautiful necklaces are “handcrafted in nickel-free sterling silver”, where “the body is plated in black rhodium”, while the outstretched wings are plated in genuine yellow gold, or bright silver.

In centerpiece lies a three-dimensional pendant topped by a sparkling green or pink crystal.

Priced at US$95 each, they come in a signature League of Legends x RockLove Collector’s Box as well, so don’t miss out!

Buy a ward. Save a life.

READ MORE: These adorable FunPlus Phoenix minis are the best thing in the Riot merch store