The esports community reacts to K/DA’s The Baddest

They’re breaking rules and hearts alike with this banger. 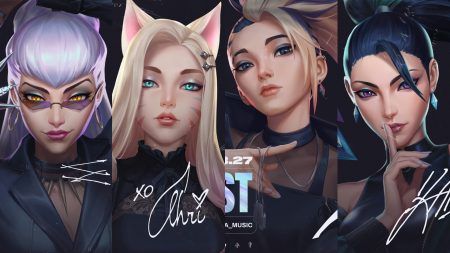 K/DA’s newest single, The Baddest, is finally here, and it is getting a lot of love so far from the esports community.

League of Legends European Championship (LEC) caster Daniel “Drakos” Drakos didn’t really like the song upon first hearing it on Twitter. Instead, he recommends listening to The Baddest on music streaming platforms like Spotify and Apple Music for better sound quality.

Meanwhile, another LEC caster, Indiana “Froskurinn” Black, seems to be fond of Kai’Sa’s sick lines. Kai’Sa slowly opened The Baddest with some catchy verses and then killed it in the second half of the song with lines like “I came to slay back and I’m better and ready to stay.”

Before K/DA, these casters knew they were the first ones to become the baddest with their song “I want the LEC back!”

The LEC team SK gaming agrees with us when we say we stan (G)I-DLE’s visuals and talents.

Host for Riot Games James Dash did a little throwback to the group’s Pop/Stars days with this photo:

Debuted back in 2018, K/DA is bringing some fresh faces to the group. Aside from (G)-IDLE’s Soyeon and Miyeon as Akali and Ahri, American artists Wolftyla and Bea Miller will take over Jaira Burns and Madison Beer as Kai’Sa and Evelynn.

K/DA first stepped onto the performing stage two years ago during the League of Legends World Championship in South Korea. They opened the finals with their single Pop/Stars which soon became a hit not just among summoners but among the whole gaming community as well.

Here is the lyric video for The Baddest, K/DA’s pre-release single.