Team WE and Edward Gaming advance to LPL Spring quarterfinals

Team WE will go up against Top Esports, while Edward Gaming will compete against FunPlus Phoenix. 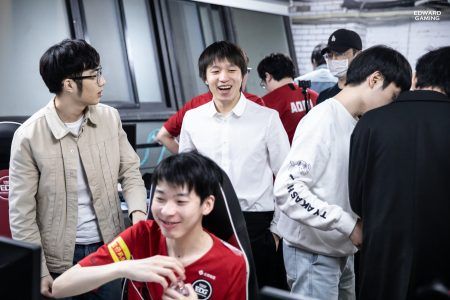 Out of the four teams that competed in the first round of the LPL Spring playoffs, Team WE and Edward Gaming emerged with 3-1 victories over eStar and Royal Never Give Up, respectively, to advance to the quarterfinals.

Team WE vs eStar

Spring Split 2020 is eStar’s first showing in the LPL, what more, the playoffs. A team comprising mostly of Development League rookies, their match against Team WE was their first best-of-five series.

The question for eStar in the playoffs was how they could adapt without Yan “Wei” Yang-Wei on Jarvan, and Liu “ShiauC” Chia-Hao on Thresh. As expected, WE banned these two core champions in the first two games. They also executed better compared to eStar, and led 2-0 in the series.

In game two, Jiang “Teacherma” Chen even blind-picked his signature mid lane champion, Aurelion Sol. While it was an unconventional choice in the current meta, that risk paid off for WE.

eStar actually led in gold throughout the second game, right until they botched a 5v4 engagement. Despite being down one member, WE started Mountain Dragon, so it was up to eStar to play things out in their favor.

Even though Yang “Xiaobai” Zhong-He had a teleport advantage, the rest of his teammates engaged even before he could enter the scene because the ward he teleported onto was too far away from the pit.

Taking advantage of eStar’s mishap, WE went on to claim Baron and take down the inhibitors. To top things off, Zhao “Jiumeng” Jia-Hao ended the game with a well-earned Pentakill in the last fight.

On the verge of losing the series, eStar showed up huge in game three. Not only did ShiauC shine on Thresh, Xiaobai also put on a great performance on Ornn.

Nearing 30 minutes into the game, after Yan “Wei” Yang-Wei stole a crucial dragon for the team, Xiaobai landed a 3-man knock-up that kept them in the game. Later on, Xiaobai was also essential when the team was down one man, but he and his remaining teammates still managed to stop WE from doing Baron.

Taking no chances, WE went back to banning both Jarvan and Thresh in game four. In the shortest game of the series, Teacherma on Galio impacted side lanes early with Hero’s Entrance. Unable to deal with WE’s front line and crowd control, eStar were felled in their first-ever playoff series.

With the win, Team WE will face off against Top Esports in the quarterfinals today.

Royal Never Give Up vs Edward Gaming

RNG’s volatile season extended to the playoffs. There were moments of brilliance, but like the last series, they only managed to win game three.

Despite a strong early game by EDG in game one, RNG clawed back to a lead after turning a team fight around at dragon. Up in gold and out of vision, they started Baron at 26 minutes.

Sniffing out RNG, keep your eyes on Hao “Aodi” Ao-Di who teleported behind the pit. Because he ran the Unsealed Spellbook keystone on Ornn, Smite was ready to be used.

Completely out of vision, he stunned RNG by flashing into the pit to smite steal Baron. Having secured the Fire Dragon Soul, EDG went on to take the win.

RNG appeared to have bounced back in game two, adjusting their early game to help Li “Xiaohu” Yuan-Hao, who was receiving a lot of attention from EDG’s jungler “JunJia” Chun-Chia.

With a slight gold lead, things turned awry the moment RNG started to group up. As members found themselves scattering from Yuumi’s and Miss Fortune’s devastating AoE ultimates, their coordination seemed to be lost as well.

With Xiaohu on Zoe, RNG managed to salvage game three. Yet the tides turned again when EDG prioritized her for Scout in game four. Keenly adapting their draft to what RNG was trying to put together, EDG boldly chose Graves to match Trundle, and Karma support for disengage.

When RNG wanted to collapse on them, EDG worked together to kite back. The more they forced RNG to dive deeper, the easier it was for them to kite them down. In the same vein, the movement speed Karma provided made it hard for Lu “Betty” Yu-Hung to properly land Bullet Time.

In this series, EDG’s line of attack was clear — keep mid lane down with Lee “Scout” Ye-chan Yu and jungler “JunJia” Chun-Chia. Especially when Li “Xiaohu” Yuan-Hao was playing immobile champions Syndra and Rumble, JunJia was there to punish over extensions in lane.

In instances when they secured lane priority at bot, EDG rotated their duo to assert more pressure in mid. At other times, Xiaohu was simply punished for his mispositions on the map from mid to late game.

Moving on to the next round, Edward Gaming will be facing their toughest opponents yet, reigning World Champions FunPlus Phoenix, on April 25.