Team Dynamics will be making its first-ever LCK appearance in the 2020 Summer Season. 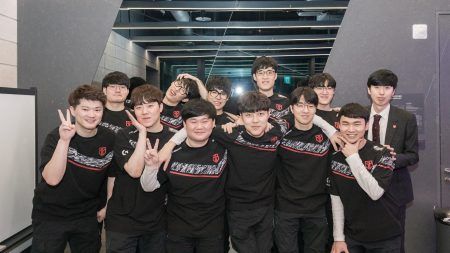 The 2020 League of Legends Champions Korea Summer Promotion tournament saw the two worst teams in the LCK, SANDBOX Gaming and Griffin, battle it out against Challengers Korea’s top two teams, Team Dynamics and Seorabeol Gaming for two spots in the LCK Summer Split.

The intense competition saw SANDBOX Gaming keep its spot in the LCK, and Team Dynamics win promotion to the top flight. Meanwhile, Seorabeol Gaming will remain in Challengers, and Griffin will be joining them as the only relegated team this season.

Team Dynamics made a quick run in the promotion series, sweeping both SANDBOX and Seorabeol in their best-of-three matches.

In their last game with Seorabeol, the team had a solid lead of two drakes and 3,000 gold. In the final clash, TD instantly deleted Kim “OnFleek” Janggyeom, allowing Seo “Faiz” Dae-gil to gun down SANDBOX for a beautiful quadra kill. The Challenger team easily sieged the undefended base to lock in their first-ever appearance in the LCK.

SANDBOX may have taken an early loss to Team Dynamics, but the LCK team swept fellow LCK team Griffin in the quarterfinals and Seorabeol in the grand final.

SANDBOX quickly ran through Seorabeol in the final game of the series. With a significant lead of 13K gold and three ocean drakes on their side, SANDBOX looked invincible to the promising CK team. While taking out SRB’s bot inhibitor, Yu “Fate” Suhyeok secured a double-kill to tilt the scale to their favor.

Though the midlaner fell after an elaborate Emperor’s Charge, the rest of SANDBOX took out SRB’s last damage-dealer, Gwon “Sangyoon” Sang-yun. With Seorabeol unable to make a dent to SANDBOX’s frontline, the LCK team quickly destroyed the final towers and Nexus, securing their return to the LCK for the summer.

Griffin ended the promotion series with a disappointing relegation to Challengers Korea. Going up against SANDBOX in their final match of the series, the team had trouble locking down map objectives such as drake kills and tower breakdowns.

Despite doing their best to defend their final turret and Nexus, Griffin fell in composition when Fate unleashed his cone-shot and burned through all of GRF’s health. The rest of SB chased down the retreating players, leaving no chances for a retaliation. With only Park “Untara” Uijin left alive, SANDBOX claimed the Nexus in just seconds, sending Griffin back to CK for the summer.

The relegation will be Griffin’s second time in Challengers Korea, with their last stint in 2018 Spring. If their team performance vastly improves throughout the summer, Griffin can earn another chance of returning to the LCK with the 2021 LCK Spring Promotion.