The LCK newcomers are close to relegation. 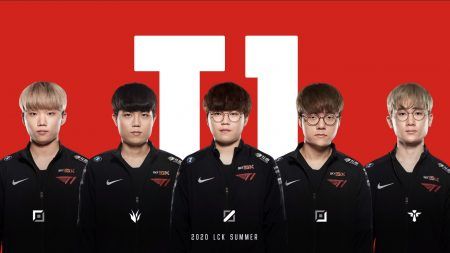 T1 pulled out another win against newcomers Team Dynamics (TD) and eliminated their chances of reaching the playoffs in Week 8 of the League of Legends Champions Korea.

Game one was a fairly tight race between the two teams. While T1 was looking to get a substantial lead with a drake kill, Team Dynamics jumped on the opportunity and initiated a clash at the dragon pit.

With Kim “Beyond” Kyu-seok’s Jarvan IV sacrificing himself and locking up half of T1 into the river, Seo “deokdam” Dae-gil’s Caitlyn got a killing shot on Lee “Effort” Sang-ho’s Karma, forcing T1 to surrender the drake to TD.

Even with the drake lead, TD wasn’t able to keep up with T1 as they picked up easy kills and pushed lanes. In the final minutes of game one, T1 gave up their top tower to Lee “Kuzan” Seong-hyeok’s LeBlanc in exchange for an all-out attack on TD’s bot-lane. After claiming the bot-lane inhibitor, T1 regrouped in the middle of TD’s base for a quick Redemption heal then quickly closed out game one.

With T1 done testing the waters after the first game, the entire squad went into overdrive for game two. They capitalized on mismatches and opted in for risky turret dives. While TD revolved their composition around Deokdam’s Caitlyn again, Kim “Canna” Chang-dong’s Camille became a critical factor in trapping the enemy team’s carries.

At the 13-minute mark, Effort’s Nautilus unleashed a nasty Depth Charge on Deokdam’s Caitlyn to buy time for Canna’s Camille to teleport in and flank the retreating players to add two kills to the board.

Though TD was able to grab one kill from T1, the LCK powerhouse was unfazed, and continued to add to their 15 kills and 13K gold lead. T1 eventually pushed through the mid and bot inhibitors, keeping the rest of TD stuck inside their base.

With the Nexus already vulnerable, Canna’s Camille and Park “Teddy” Jin-seong’s Ashe went straight for the TD squad to thwart their defenses while the rest of T1 destroyed the Nexus to complete the clean sweep.

The series win will bring T1’s winning streak up to five games while TD’s losing streak goes up to seven. Despite not making the playoffs, we’ll likely see Deokdam and the rest of the TD squad power through the two last weeks to avoid relegation.

You can catch T1 in their upcoming match against Afreeca Freecs on August 13, 7 PM (GMT+8).