Suning’s SofM: ‘I’m really proud as the only Vietnamese player to make it this far’

He’s got skills and style. 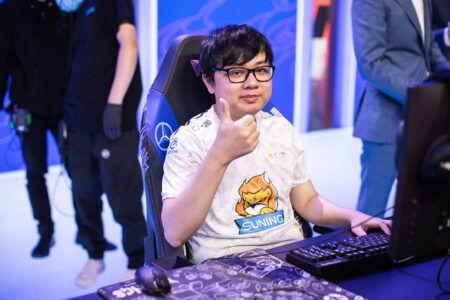 Competing in League of Legends since he was 14, he left Vietnam to move to China at age 18. From Snake Esports, to LNG Esports, to joining Suning this year, SofM finally made it to Worlds after seven years. Yesterday, LPL third seed Suning topped Group A, and are moving on to the quarterfinals as the first seed.

“I’m really proud and happy as this is my first time coming to Worlds, and becoming the only Vietnamese player to make it this far,” SofM told ONE Esports.

After his outstanding performance in Groups, he started to receive international recognition on every single one of his jungle picks. On Lee Sin, he turned around a clutch team fight with a superb Dragon’s Rage. On Graves, he outmaneuvered Rasmus “Caps” Borregaard Winther’s Syndra in a 1v1, and on Nidalee, viewers were amazed at his precise jungle camp timings.

To SofM, he finds this all “quite simple”. “For example, [if you take] Red buff first then Raptor and Murk Wolf, and remember respawn time, then your mid laner takes Raptor in round two, you can ignore it and run to Murk Wolf because that camp will spawn just in time,” explained SofM.

“If you want to dominate an enemy’s jungle, you must observe how the opponent jungler jungles, how fast they clear, whether they get help or not… And I remember everything. There’s no need to take note in-game.”

Even though he’s predominantly showed up strong on carry junglers, in the last match of the day against G2 that decided tiebreakers, SofM chose Jarvan IV, and built tank. In that game, he adjusted his champion choice to Camille, Syndra, and Ezreal who farm well early game.

Still, his identity as a “fighting” playstyle jungler remains dominant. Against LEC first seed G2 Esports, SofM recognized that Marcin “Jankos” Jankowski needed to “come up with more adventurous picks like Lillia” when playing against him.

“If their team prepared more carefully, they could have better results. Jankos has a very good ability to work with his team, much better than Broxah,” said SofM.

Heading into the quarterfinals, he revealed that even if opponents are able to grasp Suning’ strategies and fighting playstyle, he’s not feeling worried about it. He acknowledged that the team still has many shortcomings that they need to overcome, but “Suning is not too focused on the results; the most important is that we realize our mistakes and improve, as well as gain more experience.”

As more eyes are on SofM, as more people are talking about him, he also wanted to take the opportunity to clarify on the correct pronunciation of his in-game name, which is short for “Style of Me”. “My friends in China call me ‘So-fum’ but I prefer being called S.O.F.M,” he explained.

Appreciating the support international fans have shown at Worlds, SofM recommends two of his favorite traditional Vietnamese dishes, Bánh Mì and Bún Đậu Mắm Tôm if fans get a chance to try.

Standing proud this Worlds 2020 as the most successful Vietnamese player in League of Legends, however, comes with sacrifice. Due to the COVID-19 coronavirus epidemic, SofM has not been able to return home to Vietnam for almost 11 months. He stays in touch with his family so that they know he’s keeping healthy.

“I want to say thank you lots to all my fans in Vietnam for supporting me. I am going to try harder.”