Live and die by the blade. 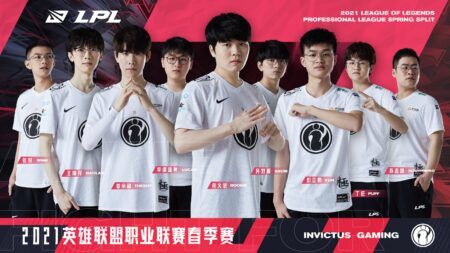 The best League of Legends pro teams aren’t necessarily the ones with the highest KDA, especially when it comes to teams in the LPL.

During their series against Bilibili Gaming in Week 7, Invictus Gaming’s Kang “TheShy” Seung-lok on Gragas got ganked by the enemy jungler. Despite using Flash under the tower, his HP was too low, and Zeng “Meteor” Guo-Hao’s Udyr grabbed the kill.

A few minutes later, the broadcast flashed a remarkably funny statistic — Invictus Gaming has a total cumulative 10,000 team deaths in the LPL since the organization joined in 2013.

Taking first place in the LPL for such a stat, even the shoutcasters weren’t sure whether to congratulate them or not. Fans were also wondering just how much of those deaths can be attributed to TheShy, who as an individual, held the record for the most number of deaths in Spring 2020.

Later that week, midway through Edward Gaming’s series against Royal Never Give Up during the LPL Super Weekend, the broadcast congratulated them for reaching a new milestone of 10,000 accumulated kills. Despite joining the LPL one year after Invictus Gaming in 2014, EDG are already not far behind in second.

The table further confirmed that Invictus Gaming is also in first place in terms of total kills at 10,936. It’s curious how a team is so consistent in playing aggressively, drawing much bloodshed over the years despite changing rosters.