The meme has finally come to the rift. 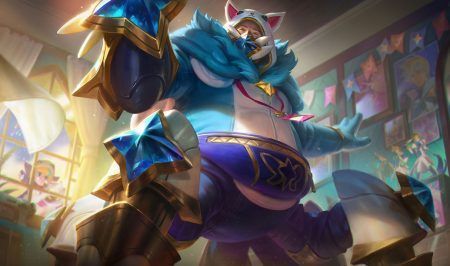 “A Star Guardian superfan of almost impossible proportions, Urgot worked really hard on this outfit for the fan meet, so please be respectful.”Credit: Riot Games

The terrifying Dreadnought from Noxus has apparently made his own cosplay outfit so that he can look like his idols, the Star Guardians.

Urgot appears to be a superfan of Ezreal in particular, as his costume has a lot of similarities to the blue Star Guardian, and the official art also shows an abundance of Ezreal merch in the background.

Pajama Guardian Cosplay Urgot’s tox-mask has been replaced with a huge blue star that matches his whole onesie getup.

Instead of a violent machine gun, his right arm now shoots stars that emit a bright blue glow. Sometimes, his adorable white familiar comes out of his star weapon!

Enemies who experience Urgot’s ultimate ability Fear Beyond Death through this skin will be greeted (and grinded) by a print of all of the Star Guardian’s cute pets instead of dreadful chains hidden inside his mechanical body.

With his power and cuteness as his weapons, Pajama Guardian Cosplay Urgot is ready to take over the Summoner’s Rift soon.

He is now available for testing on the Public Beta Environment (PBE).