This makes it SKT’s seventh League of Legends Championship. 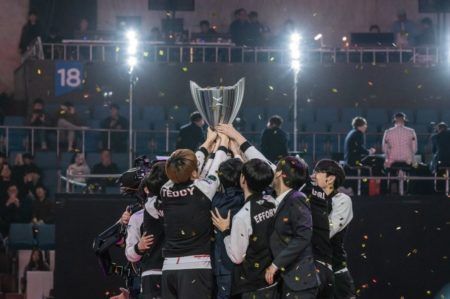 What was expected to be a close series turned into a sweep as SKT earned their seventh League of Legends Championship. They will head straight to The Mid-Season Invitational (MSI) Group Stage next month in Vietnam.

All eyes on the bot-lane

Griffin opened the series by locking in Taliyah and Pantheon on blue side in game one. This combination of champions, nicknamed the ‘Avengers Bot Lane’ by caster Nick “LS” De Cesare forces opponents to play defensively because they are quick to punish small mistakes.

How this combination works is that with Pantheon’s point-and-click stun, anyone he targets will be instantly seismic-shoved by Taliyah. The combined burst damage means that they are able to continuously exert kill-pressure in lane.

As Taliyah gets ahold of Spellthief’s Edge, she can then concentrate on poking enemy champions while receiving passive gold as a “support” while Pantheon continues farming creeps. Outside of the lane, their global ultimates give them the power to jump into action like superheroes.

As the game went on, the problem with Griffin’s team composition became apparent. With Sylas, Olaf, Akali, Taliyah and Pantheon, their win condition rested on picking one or two champions off the map before securing Baron. SKT, however, played defensively and only opted to teamfight Griffin in 5v5s, putting Griffin at at a disadvantage. A clutch Unbreakable by Cho “Mata” Se-hyeong on Braum at 35 minutes stopped Taliyah’s wall in its tracks, and with it Griffin’s hopes of taking the first game.

In game two, both teams decided to draft team compositions that excelled in 5v5 team fights which the meta favours. Unfortunately for Griffin, things went from bad to worse. Griffin decided to invade SKT’s red buff aggressively — but without their top laner Choi “Sword” Sung-won. Outnumbered and barely 1 minute and 40 seconds into the game, SKT were already up two kills.

From there, the game just wasn’t in Griffin’s favour. Lee “Faker” Sang-hyeok on Azir pushed out mid constantly with priority, which translated into jungle invades. He performed well on this champion especially during teamfights, sealing the deal.

When it came down to the deciding game three, Griffin’s coach Kim “cvMax” Dae-ho surprisingly went with Taliyah and Pantheon again while picking Elise for the jungle and having Aatrox at top. The game plan for Griffin remained the same: Use bot-lane pressure to secure Dragon, then open up the map at top with Rift Herald.

The gold was surprisingly even between the two teams for the majority of the game — which isn’t good news for Griffin whose team composition depended on getting early leads. Kills were traded in a few skirmishes before the game changed when Griffin decided to challenge SKT for a Cloud drake.

Positioning mattered for Griffin’s team composition, but they did not plan ahead in this instance. SKT on the other hand were ready and grouped. Jeong “Chovy” Ji-hoon on Sylas was the last to arrive at the fight and found himself all alone 1v5. With this one miscommunication, SKT took Baron and opened up Griffin’s base. A final team fight 20 seconds before the second Baron spawned gave SKT an ace over Griffin who were too far behind by then.

With that, they hoisted the newly designed LCK Cup.

Being the only roster in LCK that did not change from 2018 to 2019, Griffin’s performance this Spring is a testament to their synergy as a team. This season was a chance for redemption.

The team went on a 12-match win streak and shattered KDA records. International audiences were hoping to see this young team finally play on the global stage, especially after they lost 2-3 to KT Rolster last year, and failing to make it to Worlds.

The sweep by SKT was more one-sided than anyone could have predicted. Griffin chose a risky draft twice over and refused to teamfight SKT with traditional team compositions that centre around the AD carry.

Despite that, the team has done well through the last two seasons and had a huge chance in the finals. However, having failed twice over with uncharacteristic drafts, the spectre of a question remains — will Griffin really be able to qualify for Worlds in LCK Summer 2019?