Now that’s the SKT we’ve been waiting for. 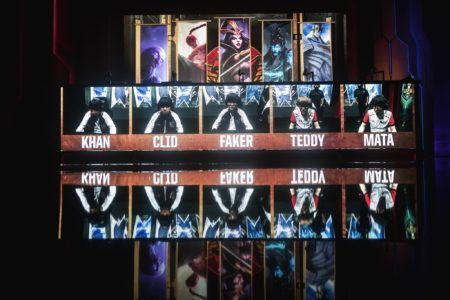 Invictus Gaming (IG) was just one step away from making a perfect 10-0 run at the Mid-Season Invitational.

Unfortunately for the Chinese team, SK Telecom T1 (SKT) outplayed them on the last day of the League of Legends MSI group stage and got revenge for their earlier game.

South Korean team SK Telecom was certainly on a roll, having won their last two games in the group stage. The one against Invictus Gaming, in particular, kept fans on the edge of their seats as SKT dominated.

The first blood happened at the top lane with a gank by SKT Kim “Clid” Tae-min’s Jarvan IV. With the help of SKT Kim “Khan” Dong-ha’s Kennen, the team’s top-laner and jungler were able to kill IG Kang “TheShy” Seung-lok’s Sylas.

IG was able to even out the death count for both teams up until the middle of the game, however, they were no match for the powerful combination of SKT Faker’s Ryze and SKT Clid’s Jarvan.

In a span of 32 minutes, SKT was able to score 18 team kills in contrast to Invictus Gaming’s four kills. SKT Clid and SKT Faker were close to having a 100% kill participation in their rematch against IG.

The final clash resulted in an ace by SKT, humbling IG and giving them their first loss at the MSI.

That said, Invictus Gaming still takes the top spot with a 9-1 score while SKT moves up to second place with a 7-3 score in the group standings, leaving G2 Esports and Team Liquid in the third and fourth spot respectively.

The League of Legends Mid-Season Invitational will come into a conclusion on May 17-19 at the Heping Basketball Gymnasium in Taipei, Taiwan for the main event stage. The semifinals will begin with Invictus Gaming against Team Liquid on May 17 and SK Telecom T1 against G2 Esports on day after.