This meta is so versatile! 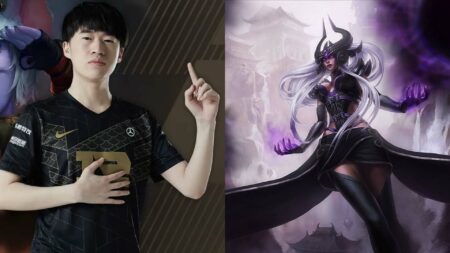 After DWG KIA dominated the opening match against FunPlus Phoenix on day one, Royal Never Give Up took the stage to go up against PSG Talon in game two and did the unexpected — they drafted top lane Syndra for Li “Xiaohu” Yuan-Hao.

In a Worlds meta where AD assassins call jungle their home, and AD bruisers permeate solo lanes, Royal Never Give Up surprised by locking in Syndra as their final pick on blue side.

Royal Never Give Up confidently locked in Twisted Fate as their first pick. Even though he isn’t meta, it’s a comfort pick for the LPL representatives, as he’s Yuan “Cryin” Cheng-Wei’s most played champion in the 2021 LPL Summer Split with an 88% win rate.

After the teams took turns to build up their drafts, RNG made waves by locking in Syndra even though Twisted Fate had already been picked, signaling that she’s going top.

Top lane Syndra out ranges Kennen in all aspects, and is a naturally strong laner. Just ask Kang “TheShy” Seung-lok, one of the few pro players to experiment on this champion at top in solo queue.

What’s more, Scatter the Weak is such a valuable ability to have against Kennen’s Slicing Maelstrom, for it pushes him away, denying all damage.

Xiaohu, who lane swapped from mid to top this 2021 season, looked natural on this mage champion. He even denied XP from opposing top laner Su “Hanabi” Chia-Hsiang, shoving him under turret in the laning phase.

“I was surprised that Hanabi backed so far that he was completely out of the experience zone. Then you shall not have experience at all, I guess,” said Xiaohu in the post-game broadcast interview with Candice.

How effective was top lane Syndra?

13 minutes in, they found kills, an early turret with Rift Herald, and had completely out farmed their opponents, amassing a 4,000 gold lead.

In full control of the game, it was up to RNG to close it out before PSG Talon had the chance to scale on Tryndamere and Aphelios.

However, at the 17-minute mark, RNG overstepped at bot lane. They forced a tower dive, took too many turret shots, and were completely unprepared for Hanabi’s Kennen backline flank which they had no vision of.

As a result, Huang “Maple” Yi-Tang’s Tryndamere scored a quadrakill, and aced the LPL squad.

The gold lead narrowed to 2,000, and Royal Never Give Up henceforth chose to slow down the pace of the game. Instead of skirmishing, they kept the lanes pushed, and eventually secured three Infernal Dragons, including Infernal Soul, which tipped the scales in their favor.

Though they didn’t secure Baron, they punished PSG Talon for doing so. Taking down three, RNG used their numbers advantage to crack open their base. One last push with their minion waves was all it took for RNG to finally close it out 37 minutes in with an unusual top lane Syndra pick.

“I might pick top lane Orianna and LeBlanc, you never know,” Xiaohu teased in the same interview with Candice.