Champions released from 2017 onward were not allowed to be used. 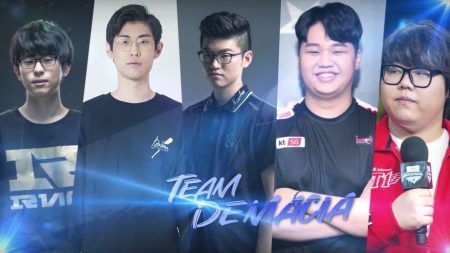 Former legendary players from the LCK gathered for a special League of Legends event called “Return of Champions Korea” (RCK) organized by Sandbox Gaming on March 11.

They were divided into teams based on two prominent factions from League of Legends lore: Team Demacia and Team Noxus.

The only standing rule was that champions released from 2017 onward were not allowed to be used.

The first game, or Set One, involved each player using a signature champion that was decided prior by an online fan vote.

Other familiar names on Team Noxus include inSec, who was voted to play Lee Sin because he single-handedly popularized the signature kickback technique on this champion in season three.

When it came down to teamfights however, Team Demacia’s team composition – Singed, Jarvan, Yasuo, Ashe and Alistar – were more reliable and had a natural synergy for wombo combos. They finished off Team Noxus 29 kills to ten, taking the win in under half an hour.

Set Two paid homage to the old LCK days where game five was played in blind pick mode. Top lane was the only role that faced off in a mirror matchup as MaRin proved why Rumble is his signature champion.

Besides snowballing top lane, Team Noxus also used bot priority to gain dragon control. Even though Team Demacia came close to evening out the gold, PawN’s Leblanc was too much to handle. With Infernal Soul, Baron buff and Elder Dragon buff, Noxus took their revenge, evening up the score 1-1.

The last set followed a standard tournament draft, and it felt like both teams took this one more seriously. Team Noxus repeated their strategy from game two, ganking up on Looper’s top lane Nocturne during the laning phase.

As the game went on, Team Demacia’s team composition scaled up with Kassadin and Kalista. These two late-game carries pulled them through, giving Demacia the 2-1 match victory.

RCK was a welcome treat for fans, giving them a chance to watch their favorite retired players come together for an evening of classic LoL. It was especially welcome now since LCK is on an indefinite hiatus due to the COVID-19 coronavirus outbreak. Riot Games also recently announced that MSI will be postponed from May to July.