Anathema’s Chains: How it works, when to buy it, and which champions will benefit

For that annoying enemy on the opposing team. 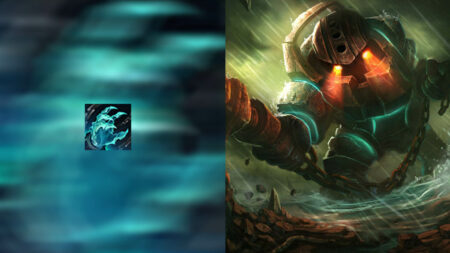 “Beautiful,” wrote T1 content creator and League of Legends analyst Nick “LS” De Cesare on Twitter. That was his first reaction to Anathema’s Chains when it first revealed two weeks ago.

Anathema’s Chains is one of two brand new items Riot Games introduced to the game in patch 11.13, the other being Hullbreaker.

YouTube content creator Skooch loves it, and thanked Riot for “the anti smurf item we’ve all been waiting for”, while Riot’s own Lead Designer Jeevun Sidhu highlighted that it’s not just meant to counter a big threat on the enemy team, but also split push champions.

Here’s everything you need to know about Anathem’s Chains:

The first thing you need to note is that Anathema’s Chains is not only a tank item, it’s a pure HP item, which means that champions who deal true damage can still hurt you to an extent.

The added 20 ability haste on tanks and supports, who are gunning to use their crowd control more than once in team fights, is also a plus.

Its active effect is very simple to use. Similar to Knight’s Vow and Zeke’s Convergence, you need to choose a champion to bind this to, this time, out of combat, on an enemy champion.

Note, however, that it is not effective to rebind Anathema’s Chains repeatedly due to its stacks. You only get damage reduction and the maximum 20% reduced tenacity against you over a 60 second period, which discourages you from swapping targets too frequently.

How effective is Anathema’s Chains as a tank item?

Priced at 2,500 gold, Anathema’s Chains is a very cheap item that’s accessible to both solo laners and supports. It is also the second-highest single health item (+650 health) in-game after Warmorg’s Armor (+800 health).

“The health per gold is maybe the highest in the game,” analyzed LCS caster and League of Legends content creator David “Phreak” Turley in his patch 11.13 rundown.

When should you build Anathema’s Chains, and on which champion?

In his Anathema’s Chains rundown, LS doesn’t think it’s an item that players should build every single game since it’s not a cookie-cutter item, and appreciates the new dimension it brings.

“Having dozens of unique niche items in the game to allow ‘item-skill-expression’ for people truly thinking about game state/opponent comp/etc,” wrote LS on Twitter.

Going into detailed scenarios where Anathema’s Chains would be useful, Phreak gave these examples:

READ MORE: How good is Viego in pro play so far this 2021 Summer Split?