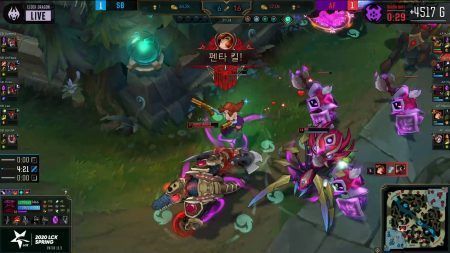 Afreeca Freecs fought a thrilling best of 3 series against Sandbox Gaming in Week 3 of the LCK.

But with the score tied 1-1, it was Afreeca Freecs ADC, Jin “Mystic” Seong-jun, that stepped up for his team, sealing the match win with an incredible pentakill.

30 minutes into the game, Sandbox’s Kim “OnFleek” Jang-gyeom activated his Glacial Prison in the bot jungle bush. Teammate, Park “Summit” Woo-tae, followed up with a superplex to isolate Afreeca’s support for the kill, but Mystic counterattacked and took him down.

Song “Fly” Yong-jun followed up with a two-man knock-up, and Mystic easily cleaned up. Mystic then used a Blast Cone to close the distance to Kang “GorillA” Beom-hyun and Han “Leo”Gyeo-re, gunning both down in quick succession.

He wasn’t done yet however, as the rest of AF chased down Kim “Dove” Jae-yeon, giving Mystic the final elimination in his pentakill.

With everyone on Sandbox dead, Mystic and the rest of Afreeca Freecs stormed their base, winning the match with a 2-1 standing.