The support player travels through time. 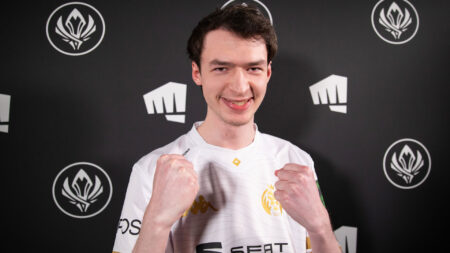 League of Legends rookie team MAD Lions have come a long way since their debut last season. MAD Lions Kaiser channeled his inner Doctor Strange for a bit, and shared his thoughts on the last Worlds, the present MSI, and the future of the team at LEC.

Last year, for the first time ever, Riot Games bestowed Europe, China, and Vietnam additional slots for the prestigious League of Legends World Championship (Worlds), giving MAD Lions the opportunity to debut on the international stage.

“Worlds was a bit of a disaster for us,” support player Norman “Kaiser” Kaiser told ONE Esports. “We were struggling to get games off of teams.”

MAD Lions’ Worlds 2020 journey was cut short after failing to qualify for the Group Stage after an upset from Turkish team Papara Supermassive during the Play-Ins in Group A, leaving them with a 1-3 record and an early flight home.

Together with this fresh pair, the white-and-yellow squad reached greater heights. They emerged under the shadows and bested top teams G2 Esports, Fnatic, and Rogue to win the League of Legends European Championship (LEC) Spring 2021.

Their victory led them to represent the European region at the Mid-Season Invitational (MSI 2021), their second international competition to date. Despite the humps, dropping games to tournament favorites Royal Never Give Up, MAD Lions Kaiser thinks the team is still performing pretty well.

“We played the Group Stage pretty cleanly,” started MAD Lions Kaiser during MSI 2021 Rumble Stage Day 3. “If we pick up our pace again, the comparison to Worlds is unimaginable because now we have so much experience and skill.”

“We work better as a team. Even after [losing to DWG KIA and PSG Talon] today, I’m still confident that we can pick it up again and perform better.”

MAD Lions have qualified for the MSI 2021 Semifinals, where they will go head-to-head against Worlds 2020 champions DWG KIA in a best-of-five series.

With the MSI 2021 competition nearing an end, the grind never stops for the LEC Spring 2021 champions. MAD Lions Kaiser will have to bid goodbye to Icelandic tap water soon as the boys will be back at the Berlin studio just in time for the LEC Summer Split 2021 which starts in June.

Interacting with renowned players, experiencing international pressure, and even making new friends — these are the things MAD Lions will be bringing back to Europe.

“Obviously, you played against really good players, the best of the best in their respective regions. That experience is already worth a lot because you don’t play internationally every single day,” explained Kaiser.

“Playing against new players and different bot lanes and even teams, [knowing] how they draft and think about the game, and play level ones — it helps us a lot and, by default, that will give us a huge advantage over the rest of the LEC teams that didn’t get this international experience.”

Guess what? Kaiser is part of the MAD Lions K-pop squad

We already know that the team’s mid laner Humanoid and bot laner Carzzy occasionally listen to Korean pop, but did you know that Kaiser does too?

Like Carzzy, Kaiser has a wide taste in music genres and listens to everything. Classical, hard rock, pop, electro, and even metal — yes, Kaiser has them all on his playlist.