Get to know this MAD mid laner. 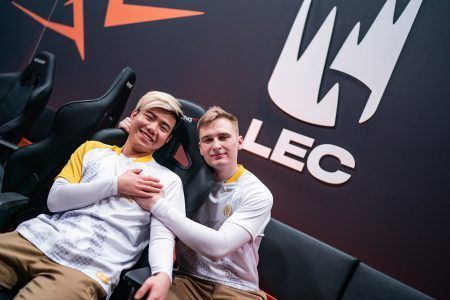 MAD Lions have shown everyone big rookie energy after debuting this year and achieving so much already. They finished third place in the LEC Spring Playoffs after league leaders Fnatic and G2, and held on to the top of the standings for weeks during the Summer Split. Now, they’ve made their debut on the Worlds 2020 stage in the Play-Ins.

Marek “Humanoid” Brázda has been on the team even before they rebranded from Splyce to MAD Lions. He started his professional League of Legends career at the young age of 15, playing for European team Dark Tigers back in 2015.

Without a doubt, Humanoid is one of the most promising players in the LEC, with a 68% kill participation record during the Summer Playoffs and produced highlight plays on his signature champion, Orianna, during LEC Summer Week 2.

On his comfort pick, Humanoid together with the team pulled off some incredible clutch plays last night as they defeated CBLOL team INTZ to keep their Worlds dream alive.

“I think everyone was really stressed out because no one expected us to play a deciding match between fourth place and fifth place,” said Humanoid to ONE Esports.

“Everyone was super nervous, but we just said to ourselves that this might be the last game, but let’s give it our best and let’s see what happens.”

Humanoid gave it his best shot, utilizing Orianna’s abilities in the mid lane which he has a 66.7% win rate on for the season.

In a Play-Ins meta which he described as one where scaling and team fighting champions shine the most, Humanoid believes this that would change going into Groups. “Once the really good teams start playing, I think the meta will be different,” said the Czech player.

Humanoid also confessed that MAD Lions have been trying to be calmer on stage since they have been playing differently than they have in scrims in the past few days. But with the power of trust and friendship, MAD Lions bested the other teams to qualify for the Play-Ins Knockout Stage.

When asked about the team’s foundational difference between them and eastern squads from the LPL and LCK, Humanoid believes it’s all about having the really good players on your team.

“I think if we have five really insane players it doesn’t really matter, unless you all hate each other, it’s fine if you’re not like the best of friends. You are still gonna win a lot. I don’t know how it is with the LPL teams, but I think the top teams with really insane players like top two, top three, in the world on every role, that’s what makes them win.”

Looking back at his career over the years, Humanoid confidently told us that he is now a better team player compared to when he was just starting out back in 2015.

“I’m better in a team environment. I’m better at helping my teammates be better than before cause in my first year I was just kind of playing for myself and just focusing on me only. Right now, I’m focusing on the whole team which is important,” said the 20-year old mid laner.

With 2020 being such a big year for MAD Lions, Humanoid also took a trip down memory lane and reflected on his days pre-LEC, when he was just starting to make a name in the European regional leagues.

“I wish I knew how stressful it would be to play,” revealed Humanoid. “Because when I played in regional leagues it was less stressful because everyone was just playing for fun. But here in LEC, it’s way more try hard and a lot of stress comes with it.”

Like his closeness with his second family MAD Lions, Humanoid seems to be really close with his real family as well.

When he’s not playing on the League of Legends spotlight, Humanoid likes to take a three to four-day break from the game to recharge and chill with his favorite coffee, latte macchiato. During the downtime during quarantine, he shared that he also enjoyed sleeping, watching Netflix and playing Among Us.

His go-to game title aside from LoL? World of Warcraft! “I’m waiting for the next expansion.”

When he’s just taking it easy on his games, listening to K-pop music always gives him insane buffs. He loves Twice and Blackpink as much as we do!

Catch Humanoid and the rest of MAD Lions on the Worlds stage later today as they play in a best-of-five series against Supermassive Parapa and attempt to keep their Worlds dream alive.