MAD Lions Elyoya: ‘NA is one step behind other regions’ 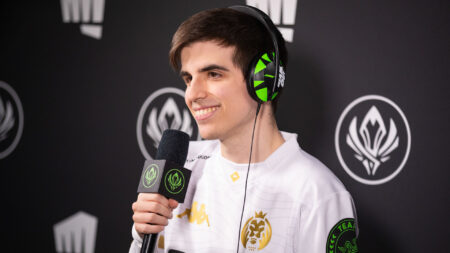 While he already predicted how the MSI 2021 Rumble Stage game would go before it even started, jungler for MAD Lions Elyoya gave us a little more insight about the League of Legends Championship Series (LCS) and other regions.

İrfan “Armut” Tükek’s Sylas initiated the teamfight by opening with Abscond/Abduct, followed by Kingslayer and Chain Lash. It was a very risky play, which is why he had to flash away from the combined damage of Robert “Blaber” Huang’s Rumble, Ibrahim “Fudge” Allami’s Sion, and Luka “Perkz” Perković’s Kindred.

However, Elyoya’s Udyr saved the day with his well-timed stuns against Perkz and Fudge, which gave Armut and Marek “Humanoid” Brázda’s Lucian seconds to escape death, and cleaned up with a triple kill.

The game ended with a convincing win from MAD Lions, kicking off their MSI 2021 Rumble Stage debut with back-to-back victories against Cloud9 and Pentanet.GG.

“EU is one step behind China and Korea in terms of structure and teams,” shared Elyoya with ONE Esports. “China’s top five teams are really, really, really good. (The LPL) is really stacked because of this and that’s a big difference.”

Is EU really better than NA?

When it comes to the NA region, Elyoya thinks that the LCS is inferior to the LEC, and that the latter’s top three teams can even beat Cloud9.

“We had the game in our favor since the beginning, but it should not have been this one-sided,” explained Elyoya. “NA is one step behind other regions.”

International fans have seen Elyoya’s stellar performance on champions like Morgana, Rumble, and Volibear, but the young jungler would really like to see Qiyana back to the meta.

“When Riot released this champion, I played it a lot on jungle and even had a 100% win rate in my previous year in the Spanish league. She’s really fun to play, and lets you do many creative things,” said MAD Lions Elyoya.