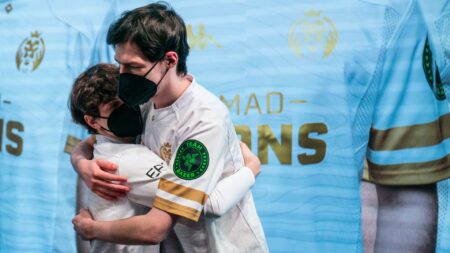 MAD Lions have been showcasing what rookie power is all about in the LEC Playoffs with wins over SK Gaming, Schalke 04, Rogue, Fnatic, and G2 Esports.

Most recently, the team pulled off a reverse sweep against Rogue in the LEC Spring Finals.

After the victory, Matyáš “Carzzy” Orság claimed that together with Bot lane partner, Norman “Kaiser” Kaiser, they are the best tandem in the LEC.

“I think we have the best understanding of the mid and late-game, plus we know how to punish opponents and snowball a game,” said Carzzy in an interview with LEC.

Carzzy and Kaiser showed off their synergy in the Rogue match against Steven “Hans sama” Liv and Adrian “Trymbi” Trybus, picking up important teamfights which ultimately led to MAD Lions’ phenomenal reverse sweep.

“We had the two new players come in and saw that they’re pretty good, I would say,” said Carzzy.

Armut and Elyoya definitely showed up when the team needed them the most especially during the last game of the series, where the former set up MAD Lions for the LEC championship trophy.

With MAD Lions as the “best team-fighting team” in the league according to Carzzy, the champions are ready to return to the international stage at the Mid-Season Invitational next month. Carzzy is quite excited to play against the best teams in the world with the new MSI 2021 format.

“Since there are no Play-Ins, we’re just going to stomp it.”