LS: ‘I’m going to choke and it’s more desirable than watching this’

Lesson learnt: Do not do this in your games. 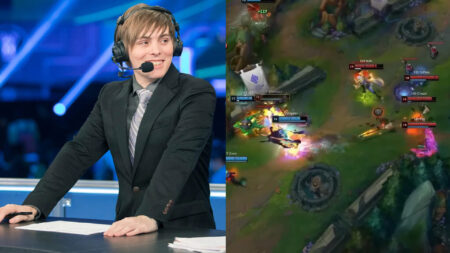 During the LCS 2021 Mid-Season Showdown series between 100 Thieves and Cloud9, LS was having a meal on stream. It was late into game one at 34 minutes, with Cloud9 having a near 4,000 gold advantage.

At this point, Baron was live, and Cloud9 were grouped in mid lane pushing out the wave. Since they had priority in bot and top lane, all they needed was to get a push going in mid to start pressuring Baron.

Instead of dealing with their side waves however, 100 Thieves also grouped in mid. At this point LS’ mouth was full, and yet he couldn’t help exclaim, “Why are 100 Thieves randomly in the middle? There’s no objective! There is no objective! Cloud9 is on the map!”

He felt exasperated because Cloud9 were not at Baron — they were in full view of 100 Thieves, hence there was no reason for 100T to position in mid as five. The team was not under threat, and neither was the Baron being taken, and they had side waves coming in, so to LS, it was completely baffling why 100T would choose to ARAM down mid.

“I’m going to choke! I’m going to choke and it’s going to be more desirable than watching this!” said LS, who got up from his seat. “Cloud9 was visible on the map! There’s no dragon, and they can’t be at Baron, why are you in the middle? Why? Got a hot date?”

In a matter of seconds, 100 Thieves lost the team fight in mid, handing Cloud9 their first win. C9 went on to sweep the series 3-0 to advance.

Cloud9 will take on Team Liquid in Round 2 in the upper bracket, while 100 Thieves will face off against Dignitas in the lower bracket this weekend.