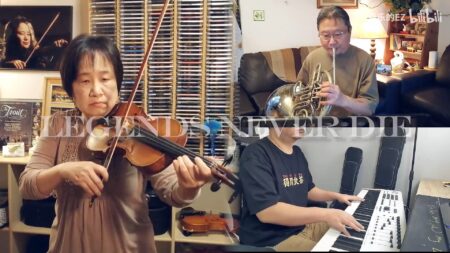 Like the 2021 Mid-Season Invitational, Worlds 2021 is currently being held in Reykjavik, Iceland with no audience.

Fans haven’t been able to cheer for their favorite League of Legends esports teams live due to the ongoing COVID-19 pandemic, so this one LPL fan from China put up a “Legends Never Die” music video of himself and his elderly parents performing the track at home in a big show of support for his region.

The significance of ‘Legends Never Die’ in League of Legends esports

The LPL fan, whose channel goes by the name “玩音乐的EZ”, beings by playing the classic Legends Never Die intro quietly on an electric keyboard.

At the 20 second mark, his father surprises, and enters into the frame by playing the main melody of the song on a French horn in the comfort of their living room.

In the verse before the chorus, his mother elegantly takes over, playing the violin with utmost professionalism. In the background, you’ll notice that she has a music shrine full of CDs, multiple violins, awards, and a photos of her playing in an orchestra during her younger days.

Legends Never Die is particularly significant to Chinese fans because it’s the official Worlds 2017 theme song, the year that the World Championship was first held in China.

It was a monumental event, spanning four cities in sell out arenas. The band Against The Current, who collaborated with Riot Games on Legends Never Die, also performed it live and shared the stage with Jay Chou in the opening ceremony at the famed Bird’s Nest National Stadium in Beijing.

READ MORE: 5 things you missed in ‘Burn It All Down’, the official Worlds 2021 song