As part of LPL Cares, these 10 pro players visited an autism charity 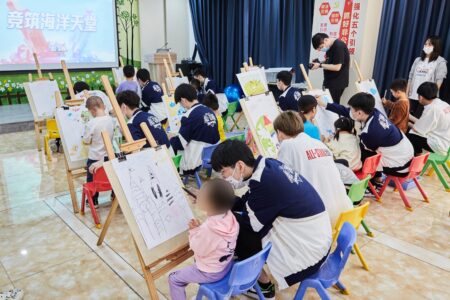 Since the All-Star weekend was held in port-city Haikou, the capital city of Hainan island south of China, participating pro players took time off to visit the Haikou Yurun Special Children’s Education and Training Center, which cares for children with autism.

In collaboration with the One Foundation Ocean Paradise Project, these 10 pro players donated gifts, and spent a meaningful afternoon with the children in teacher-led school activities.

This is the first LPL Cares initiative of its kind

On December 12, these 10 prominent LPL pro players represented the LPL and their teams at the charity event:

Together, they co-created paintings with the children and engaged in hands-on activities which aimed to help improve cognition. At the same time, the pro players also had a chance to learn more about autism.

LPL Cares will be donating CN¥343,000 (US$53,900) to the One Foundation Ocean Paradise Project, which is the amount of total gold earned during the LPL All-Star Weekend’s main event games.

Earlier in the year, LPL Cares adopted a giant panda as part of its ongoing conservation efforts. The Chinese League of Legends esports league promises to keep expanding its charitable efforts, and collaborate with more organizations in the future.