LoL vs MLBB beach skins showdown: Who wore it better?

Summer just got a lot hotter. 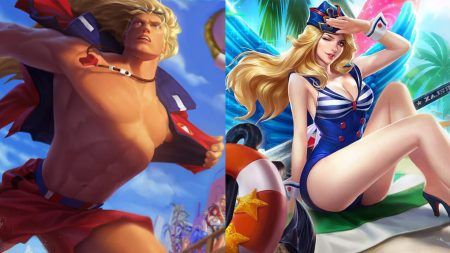 With many places in the world slowly opening up again as lockdowns are lifted, and life slowly gets back to normal, we might actually be able to enjoy some time out in the sun!

For gamers, many of us double up on the summer fun with beach and pool skins for our favorite heroes.

Two of the most widely-played games in the market — League of Legends and Mobile Legends: Bang Bang — each have their own line of popular summer-themed skins, but who wins in the battle of the beach skins?

Leona had one of the earliest Pool Party skins released, with the front line support seen taking a more relaxed stance at the beach.

With an umbrella as a sword, and surf board as her shield, the best part about Pool Party Leona is the big sunflower in her hair, which gives her a nice feminine touch.

In the other corner we have Kagura, MLBB’s mage hero whose umbrella is her original weapon.

In line with the Japanese Matsuri theme, she swapped out her modest blue kimono for a short, flirty yukata embellished with see-through chiffon. Her long hair is now a bun and dyed midnight blue, which goes well with the blue koi-themed Japanese umbrella.

Who would you rather share the shade with? For us, it’s Kagura.

First released in summer 2016, Pool Party Fiora was an instant fan favorite because Riot gave her a completely different feel compared to the rest of her serious skins.

While she still wears her trademark “you-don’t-ever-want-to-mess-with-me” face, her saber is now a float, while her full body armor has been swapped out for a chic bikini top and fitting surf shorts.

Also using bar floats as her choice of weapon, MLBB’s Fanny in her summer wear is equally capable of saving lives.

Released in July 2019, she joined Claude on the lifeguard squad, and is ever-ready to jump into the pool in her cute orange life vest.

At the end of the day, who will turn more heads at the pool?

We say Fiora. No contest.

Draven and Hayabusa are two men who aren’t afraid to show off their legs for summer.

A burst marksman, Draven’s axes keep their shape in foam. He’s also swapped out his fur-lined outfit for a bright yellow life jacket and swimming trunks.

While Hayabusa still throws out shurikens in-game, for summer, he has specially sharpened a swordfish to replace his sword.

The assassin not only cuts down enemies, he’s also here to slice fish into sushi. A man of many talents, Hayabusa clearly brings much more to the table.

Pool Party Graves retains his renegade feel, while showing off his rugged, hairy chest and arms.

The buffed ranged carry who has become the best jungler in the Rift, Pool Party Graves’ autoattacks and abilities pack a lot of splash. Smoke Screen for example, throws out a water sprinkler that spins!

Marksman Claude uses a water gun too, and has a bunch of bursting water effects in game.

While Lifeguard Claude’s overall color scheme is refreshing, Graves Pool Party has a better array of complementary colors. There’s also a lot more detail in his skin, like his arm tattoo, string necklaces, headphones, wrist band, and even a towel.

Plus, Graves’ water gun is bigger. And no matter what anyone tells you, size matters.

A support who tethers to his AD carry, Taric is caring and dazzling at the same time.

Letting his gems rest for the season, Pool Party Taric will dash in to save your life with his array of lifeguard accessories.

Ready to jump into action with her own life buoy is Sweetheart Freya, a Valkyrie turned sailor girl for the summer.

Tied to an anchor, it acts as her shield as she strikes foes with an oar. In line with the water splash effects, her Sacred Orbs are now bubbles.

The only thing is that when Freya ults, big beautiful blue wings stretch out from her back, and while they are part of the original hero design, it doesn’t entirely fit into the beach theme.

When Taric ults on the other hand, sunglasses descend during his Cosmic Radiance animation, which is undoubtedly, super cool.