Liiv SANDBOX just pulled off the biggest upset of Spring 2021 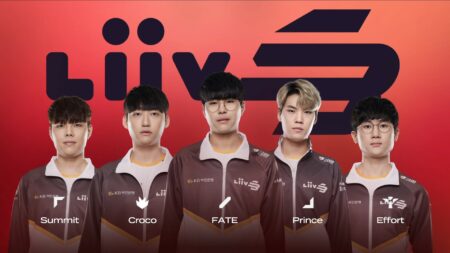 Despite being a developmental organization in the LCK, Liiv SANDBOX managed to turn their season around with a massive win over superteam Gen.G.

Entering the series, Yoo “FATE” Su-hyeok and his crew were on a four-game losing streak, and wanted to right their wrongs against the Tiger Nation team who boasted a five-game winning streak and a 9-3 record.

Even with the significant differences in standings, LSB did not let their bottom-table position overshadow their potential. Game one was looking like an even match-up by the late game, but LSB took matters into their own hands with a clash at the Baron pit.

Lee “Effort” Sang-ho’s Alistar hex-flashed over the pit wall and delivered a two-man Pulverize that also forced Park “Ruler” Jae-hyuk to use Xayah’s ult to spare himself from the knock-up.

Both sides suffered two deaths, but FATE’s Viktor took it a step further and sacrificed himself by eliminating Ruler’s Xayah with a Death Ray and an auto-attack.

By 36 minutes, Gen.G were poised to finish the game with a slight gold lead. Recognizing that they had a chance to punish Park “Summit” Woo-tae’s overextending Camille, Effort disrupted their plans with a three-man knock-up right outside of the dragon pit.

As Summit distracted Kim “Rascal” Kwang-hee’s Volibear and Gwak “Bdd” Bo-seong’s Azir in the bot lane, the rest of LSB followed through and hunted the Gen.G trio down. With only Rascal alive in the aftermath, the full LSB squad sieged the mid lane and claimed the game one victory.

Game two featured an even stronger performance by LSB, thwarting all of Gen.G’s powerhouse moves with their own classy outplays.

In a top lane skirmish, Rascal’s Sion cornered Summit’s Irelia to the tower in a three-man gank alongside Kim “Clid” Tae-min’s Nidalee and Bdd’s Syndra.

While things were looking grim for the top laner and assisting jungler Kim “Croco” Dong-beom, Summit came through a Flawless Duet that stunned both Clid and Rascal, giving Croco’s Udyr and FATE’s Orianna the opportunity to help eliminate the trio.

The underdog squad closed things out with a deadly punish on Rascal’s brush facecheck. After a flurry of skills came out of the bush, LSB handed over a flashy triple-kill to Lee “Prince” Chae-hwan’s Ezreal, and went straight to the Nexus to complete the sweep.

Though the resounding victory is the squad’s third win of the season, Liiv SANDBOX is showing that they still have the talent and chemistry to keep the strongest LCK teams in check.