The LCK is their playground. 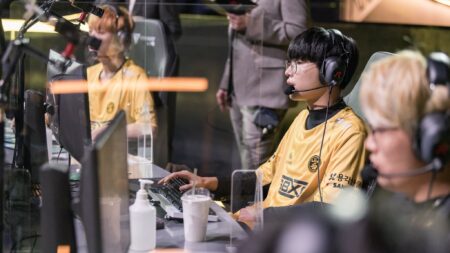 Week 2 of the League of Legends Champions Korea (LCK) featured a phenomenal showing by Liiv SANDBOX against the league’s stacked teams.

Liiv SANDBOX started the week off with an exciting match against Hanwha Life Esports.

Prince’s Vayne was a late-game assassin

Prince on Vayne was an unstoppable force in the game-ending clash at mid lane. After slamming Lee “DuDu” Dong-ju’s Gwen into the wall with Condemn (E), the AD carry danced around the fight with Final Hour and melted his opponent’s health bars.

With only one HLE member standing, the remaining SANDBOX players sieged structures down mid lane for the game one win.

Croco rounded up the HLE squad

Croco made a more impactful appearance in game two on jungle Diana.

The LSB squad followed up to claim a clean ace, and went straight for their second and final Nexus of the match.

FATE and Summit turned the tides at the last minute

Liiv SANDBOX had a rocky game one against superteam T1, but the underdog squad managed to turn things around with a thrilling clash near Baron.

As T1 was setting up for another Baron, FATE’s Sett delivered a flanking Showstopper (R) on Kim “Canna” Chang-dong’s Jayce to start the final fight.

Park “Summit” Woo-tae’s Gnar quickly joined in and stunned two members of T1 into the wall with Gnar! (R). As Prince’s Ezreal laid down damage safely from the backline, the LSB crew came out with an ace to claim the first game victory.

Effort flexed his support skills against his former LCK squad

Game two was an even cleaner performance from the SANDBOX squad. Support player Lee “Effort” Sang-ho put on a brilliant display on Thresh, showcasing elaborate hooks and lanterns.

As a former T1 member, Effort had the chance to prove to Lee “Faker” Sang-hyeok and the rest of the squad what he’s worth.

While LSB was sieging the top inhibitor turret, Faker’s Azir caught Prince’s Jinx in an Emperor’s Divide, but Effort placed his lantern right where Prince landed so that she could Dark Passage to safety. They then turned around the fight for the ace and the well-deserved sweep.

You can catch the action on the official LCK Twitch and YouTube channels.