Another season, another high flying C9. 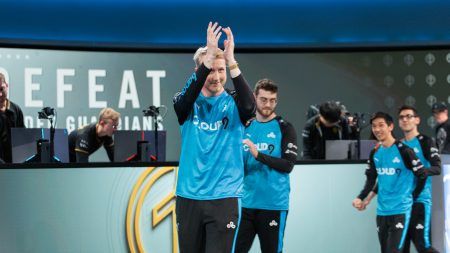 The second week of the LCS Summer Split has ended and Cloud9 remains perfect after defeating Evil Geniuses and Golden Guardians.

Though Daniele “Jiizuke” Di Mauro and his crew suffered a loss to C9, EG held onto second place, tied with Counter Logic Gaming and FlyQuest.

Match of the week: Cloud9 vs Evil Geniuses

Against an improved EG, Cloud9 was still able to rip through them just ten minutes into the game.

Robert “Blaber” Huang charge in on Olaf and ran three members of EG down topside. A well-timed teleport and hot pursuit by Yasin “Nisqy” Dinçer then dismantled bot, garnering a total of four kills for the team.

With the kill-lead, the rest of C9 went into overdrive for a clean finish. Together with his team, Blaber secured Infernal Soul and Baron.

By the 25th minute, the buffed-out team marched with two creep waves at the bot and mid, and eventually claimed the Nexus for the well-deserved win.

Though the whole team has been significantly improving since Spring Split, Stixxay leads his underdog crew with impressive, momentum-breaking clashes that gives CLG a winning edge.

Even with Dignitas’ ADC Johnson “Johnsun” Nguyen ahead of the curve in terms of items and gold, Stixxay on Aphelios tore through his opponents with Infernum. With his team helping to peel, Stixxay managed to secure the game-winning triple-kill.