Cloud9 bounced back after a tough loss last week. 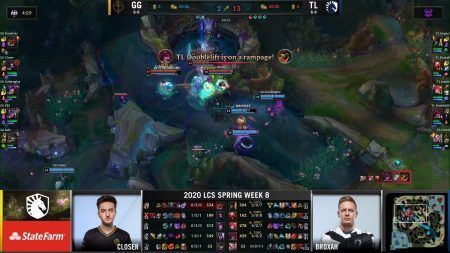 The League of Legends Championship Series is finishing its Spring season with all matches now played online, with Cloud9 still soaring above the competition.

Despite suffering their first-ever Spring loss to TSM last week, the boys in blue have bounced back with another perfect week.

Match of the Week: Dignitas vs Counter Logic Gaming

Dignitas put up an incredible display of skill when facing CLG. With Henrik “Froggen” Hansen dismantling CLG’s positioning, Heo “Huni” Seung-Hoon flanked the whole team from the jungle and pinned down half of CLG at their own gates.

Johnson “Johnsun” Nguyen immediately followed up with a barrage of missiles on the remaining CLG members, claiming the ace and the game in one final clash.

Team Liquid’s Broxah was an unstoppable force in their game against Golden Guardians.

The AP-heavy jungler controlled GG with incredible casket blasts and even claimed the life of Can “Closer” Çelik with a dash body slam.