Nuguri and the boys take second place with a sneaky win against Faker. 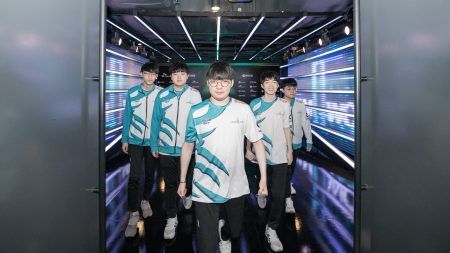 The League of Legends Champions Korea completes its third week with DragonX still flying high above the league. As for the teams right behind DRX, DAMWON Gaming and Afreeca Freecs tasted a week full of victories while LCK powerhouses T1 and Gen.G are still finding their rhythm in the season.

Match of the week: DAMWON Gaming vs T1

DAMWON Gaming did the impossible and pulled an impressive sweep against Lee “Faker” Sang-hyeok and T1, proving that their current LCK success is no fluke.

Despite having a rough early game with T1 taking three drakes and nine kills, Kim “Canyon” Geon-bu pinned down Lee “Effort” Sang-ho with a pillar at Baron, giving his team a quick kill. With Cho “BeryL” Geon-hee executing a Magical Journey into the mid lane, the rest of DWG collected two more needed kills for the turnaround.

In the final clash, Jang “Ghost” Jong-yun nailed some pinpoint hits on Kim “Canna” Chang-dong while Jang “Nuguri” Ha-gwon teleported into the midlane. With the free kill on Canna, Nuguri slowed down the retreat with an instant knock-up on two more T1 members. With only Faker and Park “Teddy” Jin-seong left in the fray, the rest of DAMWON charged in for the game-winning ace.

Game two shared a similar story between the two sides. Though T1 claimed the Cloud Soul, DWG was efficiently pushing their lanes to leave their opponents stuck inside their base. As the game turned into a standstill, it all came down to an intense smite battle for the Elder Dragon.

With DWG holding out until the very last second, Canyon and his squad caught T1 on the backfoot and easily charged into the pit for an Elder Dragon steal. Now equipped with the deadly buff, DAMWON easily chased down the remaining members for the ace and game two finish.

The Afreeca Freecs’ midlaner has been turning some heads with his incredible playmaking in recent weeks. In their match against KT Rolster, the Syndra user initiated a team clash with three-man stun in the jungle. With Kiin teleporting in for the flank, the Freecs were able to capitalize on Fly’s perfect stun and grab two kills on the KT’s main carries.