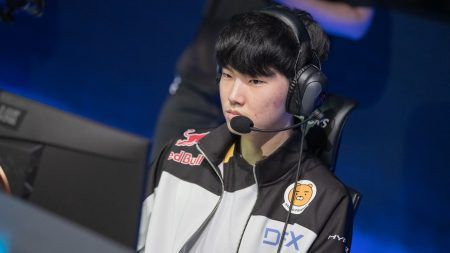 Even though last season’s leaders T1 and Gen.G had a rough start, the two teams have finally caught onto their groove and moved up to second place after a week full of wins.

Match of the week: DAMWON Gaming vs Gen.G

This match-up showcased the incredible skill and teamwork of two LCK top dogs.

After cementing their lead with a Cloud Soul steal by Kim “Clid” Taemin, Gen.G closed out the first game with an all-out attack at the Elder Dragon.

Even though DWG started Elder and took it down to a low HP, Gen.G crowded the dragon pit and were led by Kim “Rascal” Kwang-hee on Renekton who soaked up the initial incoming damage.

After splitting up DWG, Gen.G relied on AD carry Park “Ruler” Jae-hyuk and mid laner Gwak “Bdd” Bo-seong to finish off their opponents for the win.

In game two, DWG upped their offensive game with Jang “Nuguri” Ha-gwon on multi-stunner, Kennen. A clinical finisher in teamfights, the team trusted his Slicing Maelstrom to deliver.

Though Bdd was able to pull off an impressive Baron steal, his team paid the price for diving in too deep.

With the Gen.G players on the retreat, Jang “Ghost” Yong-jun and Nuguri immediately came from behind the Baron Pit to secure exit kills. Leaving only Kim “Life” Jeong-min alive, the team rushed into Gen.G’s base to tie up the series.

DWG kept their momentum up, and dominated the early game three with a 5-kill lead.

Gen.G however, managed to turn the tides at the 21-minute mark with an impeccable Baron claim and clean ace, which gave them a gold and Baron buff advantage.

Gen.G eventually closed the series with another courageous charge into the last Infernal Drake. Rascal kept DWG at bay on Ornn while the rest of his team secured the Soul.

With only two DWG members left to defend, Gen.G quickly razed through mid lane and Nexus turrets for the final match victory.

DRX’s bot laner provied once again how godlike his sharpshooting skills are in this highlight.

Going up against an Infernal-buffed Afreeca Freecs line-up, things were looking grim for the DRX squad in the final fight.

Choi “Doran” Hyeon-joon went in for a Hail Mary Slicing Maelstrom that opened up an opportunity for Deft to capitalize on. As Doran took down Afreeca’s ADC and went golden, Deft quickly unleashed pinpoint skillshots that burned down his opponent’s health bars.

Though Doran fell to a point-blank Paddle Star, Deft avenged his teammate with a double-kill that secured DRX the game win and the series.