Dom tells us the do’s and don’ts around the drake pit. 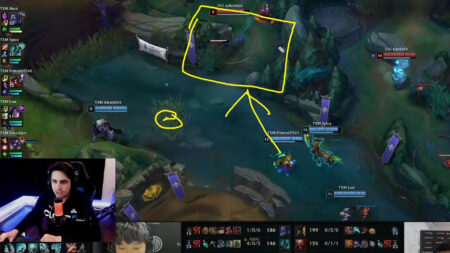 In the first episode, Dom tackled TSM’s match against Dignitas and how dragon set-up and choke control could make or break your chances of winning. In this example from LCS Spring Week 7, TSM are up by six kills and 4k gold, but managed to squander their lead in a crucial situation with the third dragon.

The first thing that Dom points out about TSM’s gameplay is how unsynchronized the players are. With the dragon a minute away from respawning, Jungler Mingyi “Spica” Lu was still busy clearing Gromp while Hu “SwordArt” Shuo-Chieh’s Alistar was already setting up vision for a potential clash in the river.

“A really prominent concept in League that has been talked about for ages is support and jungle synergy,” explained Dom. ” [They] work together not only to deny vision but also create vision pockets so that, going into these dragon fights, they have massive advantages.”

Spica eventually reestablished control of the river by clearing the mid creep wave with Tristan “PowerOfEvil” Schrage while SwordArt created vision with a deep jungle ward.

Despite having complete control of the river, TSM was reluctant to utilize the chokepoint for a fight. Even with SwordArt’s Alistar ready to knock up their opponents from the river bush, the team decided to back off and let Dignitas enter the river.

Dom points out that Dignitas should not be able to go through the small pathway, and would actually have to push through the mid lane and use the wider line brush to contest the dragon.

The streamer also highlighted that Dignitas had four Flash-less players entering the chokepoint so Spica’s Hecarim and POE’s Viktor could easily engage the enemy squad with their ults and have Heo “Huni” Seung-hoon’s Shen join the fight with Stand United.

Unfortunately, TSM just didn’t have that killer instinct to go in and contest DIG’s attack on the epic monster. With TSM’s quartet split around the pit and too hesitant to fight, Dignitas was able to claim the dragon and get to soul point for free.

Dom stated that TSM could still play out the situation despite losing the advantage. He suggested that Spica’s Hecarim could control the fight with Huni’s Shen and have Lawrence “Lost” Hui’s Kai’Sa follow up with Killer Instinct, but it wouldn’t be as easy as the initial choke set-up.

TSM’s dragon fumble is just one of many incidents in the LCS, but Dom believes that such errors need to be evaluated to cultivate a better and more competitive region in the long run.

“If we don’t start figuring out how to leverage our leads properly in situations like this, we’re not going to be able to actually contest the best teams in the world and in international events,” concluded Dom.

You can watch the full episode down below: