Is this the best bush to conceal a ward on Summoner’s Rift? 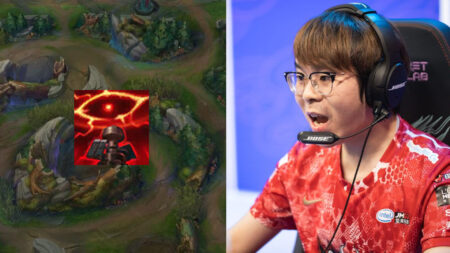 What’s the use of a ward if your team doesn’t utilize the information it brings? Nothing.

Which is why only at the very highest level of League of Legends pro play are we able to appreciate the beauty of vision control. In JD Gaming’s juggernaut match against league leaders Royal Never Give Up last weekend in LPL Spring 2021, Zuo “LvMao” Ming-Hao found the perfect time to place a Control Ward in the enemy’s bot side jungle.

After pushing bot lane’s wave into the enemy, triggering a reset, JD Gaming’s duo backed at level four for a shop purchase. Moving out of base, Lee “LokeN” Dong-wook’s Tristana walked back to lane, while LvMao weaved through the jungle.

As pings went down, JD Gaming had full knowledge on where RNG’s mid laner and bot laners were. LvMao even walked past their jungler by the Raptor camp. This signaled that it was relatively safe for him to move deep into RNG’s bot side jungle, for their laners were preoccupied with the waves and would not collapse on him.

And so, opposite RNG’s red buff, LvMao placed a Control Ward at 5:49.

Thanks to this 75 gold investment, JDG gained an information advantage over RNG, and therefore controlled the early to mid game.

At 6:32, they spotted Shi “Ming” Sen-Ming’s Leona on rotation back to bot lane, so they didn’t need to fear a roam. At 7:02, after Seo “Kanavi” Jin-hyeok secured the first dragon, they saw Yan “Wei” Yang-Wei’s Hecarim moving from the bot to top. At 9:29, they had vision of Wei clearing his red buff at the bot side jungle, which allowed Zhang “Zoom” Xing-Ran’s Sett to play aggressively across the map. Even though LvMao still fell to RNG’s overwhelming bot lane dive, Zoom pushed his advantage further by securing first tower gold and more than 50 CS lead over Li “Xiaohu” Yuan-Hao.

Finally, at 12:49, when rotations were executed and the duo laners rotated to top, the Control Ward disappeared — not because Royal Never Give Up spotted it out, but because LvMao had to ward the top side of the map.

Even though the gold difference between both teams wasn’t large, in the long run JD Gaming were still in a lead because they had full dragon control. Plus, they were able to put their jungler and top laner ahead of the curve as their AP and AD carries farmed for late.

This definitely paid off, as Zoom was awarded the MVP in game one for his commanding performance on Sett, and again in game two on Cho’Gath, sweeping Royal Never Give up 2-0.

READ MORE: 369 goes for the 1v5 with the entire series on the line