Is there a place for Lillia in the current meta? 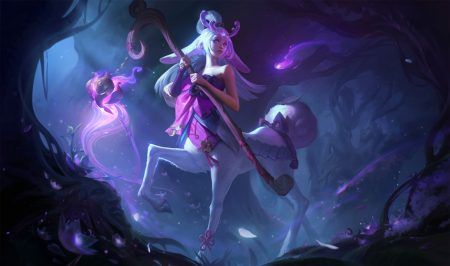 A mid range jungle skirmisher, the League of Legends community has been quiet about Lillia since her release, whether in solo queue or professional play.

So far, she has only hit the top of the League of Legends subreddit once, when YouTuber Phylaris showcased how to mechanically perform a full jungle clear without leash on Lillia.

The perfect run would entail her clearing out her entire jungle by 3:15, starting with Red Buff, Krugs, Raptors, then moving to top side while still having one Smite left to secure top Scuttle.

Her fast jungle clear speed is not surprising. Blooming Blows (Q) does AoE damage, while her passive, Dream-Laden Bough, deals a portion of the target’s maximum health as magic damage over a duration.

And yet, despite these strengths, her win rate has been abysmal. According to OP.GG, jungle Lillia’s win rate is only 45%.

On the other end of the rankings sits Karthus with the highest win rate for a jungler at 53.32%. His buffs in patch 10.14 saw him quickly climb in win rate, and he’s also capable of high AoE damage to camps for quick clear speeds.

Both of these champions like to farm, are not gank-heavy and do not possess hard crowd control. Yet, Karthus being a mage, does have longer range, a sizable slow from Wall of Pain (W), and an ultimate that is not only unconditional, but also an auto targeted global with scaling damage.

Plus, even after dying, he can still do damage thanks to Death Defied, so that’s always helpful.

In contrast, Lillia’s ultimate, Lilting Lullaby, has no range limitations, but is fully dependent on whether she’s able to hit enemies with Dream Dust. Compare this with Karthus “pressing R”.

No doubt her role is different as a mid-range skirmisher, but the value she brings in this role is minimal.

In the current meta where team fighting around objectives is the name of the game, junglers either provide zones of control, hard crowd control, engage, or in the case of Kayn and Kha’xiz who received buffs, are there to assassinate the back line.

In other words, junglers in the pro meta are tanks or bruisers that the team can rely on in fights. In solo queue, assassins naturally work well too.

Skirmishers (or duelists) on the other hand, are champions that are best at taking sustained trades by wearing down targets that come within their range. Riven, Tryndamere, and Jax for example, fall into this category, none of whom are relevant in the current meta.

They lack burst damage, and their output is fully reliant on their combination of abilities and auto attacks. When selected, they are typically played in top lane, and run Conqueror for extended trades.

This is why pros and ranked enthusiasts alike have been playing Lillia in the top lane instead of the jungle because it’s a little more effective, holding a 46% win rate.

In professional play, Lillia has not found success either. Debuting in the LPL, she was played by Dominus Esports’ Wang “Xiaopeng” Peng, Vici Gaming’s Lu “Leyan” Jue, and Victory Five’s Wei “Weiwei” Bo-Han, all of which ended in defeats.

Despite being ahead in CS, experience and gold by 15 minutes, these players weren’t able to translate Lillia’s advantages into team fights later on in the game.

When skirmishers are viable in the meta again, that’s Lillia’s unique abilities as the only AP based skirmisher, will shine. When will that happen? Well, when was the last time we saw Tryndamere in pro play?

Highly dependent on team composition, Lillia can’t be compared to the last few newly released champions. Her tool kit isn’t as wide as the blind-picked Aphelios, and she doesn’t have reliable engage like Sett, nor does she have massive scaling power like Senna.

For now, we doubt she’ll be played heavily in the jungle, since her toolkit allows her to wave clear in lane with Blooming Blows. Even then, she can only be a situational pick against certain known match ups.

She has the highest win rate against Sion and Mordekaiser in solo queue according to OP.GG — champions that she can out damage early on with Blooming Blows. In team fights however, her counterparts have a higher potential to deliver more value with their ultimates.

Down the road, will Lillia, like Sett, be played in a role that wasn’t part of Riot’s original design intent?