Is Kog’Maw sleeper OP after these patch 11.9 buffs? 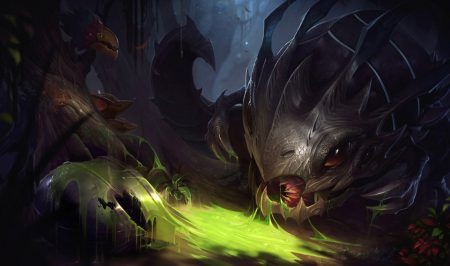 In the 2021 League of Legends Spring season, Kog’Maw was only played once in the major leagues by Hanwha Life Esports’ Kim “Deft” Hyuk-kyu which resulted in a loss.

This current League of Legends and Mid-Season Invitational patch 11.9 buffs him a second time in Season 11, alongside his most paired support, Lulu.

Did Kog’Maw really need these buffs? Both T1 content creator and analyst Nick “LS” De Cesare as well as LCS caster David “Phreak” Turley both stated in their patch rundown videos that he did not, for Kog’Maw was already strong before these changes.

In patch 11.9, two abilities were buffed:

In the previous patch 11.5, Bio-Arcane Barrage was buffed:

Since AP itemization changed so much in Season 11, the consensus is that only AD, on-hit, attack speed Kog’Maw is viable now. Caustic Spittle (Q) is the ability that AD Kog’Maw maxes, so that extra boost to resistances reduction combined with the previous improvement to Bio-Arcane Barrage (W) means that he’ll shred harder, especially against tanks in the late game.

Considering that Jinx, Kai’Sa, and Xayah were the most picked AD carries in Spring 2021, and that all of them like to scale, Kog’Maw would fit comfortably in the current bot lane meta.

The recently buffed bonus attack speed from Lulu’s Whimsy (W) will also help Kog’Maw out in the early game.

“I think he’s sleeper and no one’s playing him for reasons unbeknownst to me,” said LS in his patch 11.9 rundown. “He’s one of the few AD carry champions in the game that when you see hits a certain item threshold, you can’t go near him.”