Is 17-year-old Zeus a better fit for Faker than starting top laner Canna?

The rookie could anchor T1’s top lane for years to come. 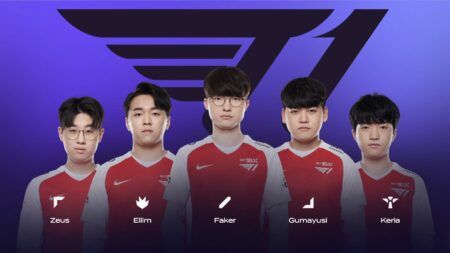 Zeus fared well against Lee “Rich” Jae-won and showcased why he was one of the best players in Korea’s ranked leaderboard. Using Gnar in the first game, Zeus communicated well with his team, showing good coordination.

In one instance, Zeus was stuck in a tight 2v1 situation with a gank by Han “Peanut” Wang-ho’s Udyr. Instead of backing up to his tower, he slipped past both NS players and made his way to the river to set up an amazing Emperor’s Charge/Lilting Lullaby wombo-combo from Lee “Faker” Sang-hyeok’s Azir and Choi “Ellim” El-lim’s Lillia.

By late game, Zeus found himself in an even bigger predicament, with four NS players ganking his split-push side lane. He managed to stall them with a clutch Wallop, and was able to set up another amazing clash for T1 to claim game one.

Game three was less flashy for the rookie top laner. Aside from a first-blood play that earned him four assists, Zeus was mainly there to be a tanky frontline for Faker, who disrupted Nongshim’s positioning.

Whether it’s selfless gameplay or macro movements on the map, Zeus is an assist-heavy player who always looks for opportunities for the team to finish fights. From the highlights, you can see that he meshes well as an initiator, with Faker taking the lead on offense.

On the downside, the rookie top laner still struggles with drafting more carry oriented heroes like Jayce. In the second game, Zeus wasn’t able to find the right footing as the game transited to the late game. He was able to zone out Rich for a better creep score, but lacked the killer instinct to duel with the opposing top laner to widen the gap.

Despite a questionable game two, Zeus’ debut seems to showcase what Faker can do with growing talent. The 17-year-old phenom with the likes of Ellim and Lee “Gumayusi” Min-hyeong are able to efficiently follow through Faker’s mastermind plays.

As a substitute, Zeus may not be ready yet to fully take over Canna’s starting role. If Faker did not play alongside him, Zeus would likely not be able to shine as a standout carry, at least based on what we’ve seen this series.

What we do know is that Zeus has exponential potential to grow alongside experienced players like Faker and senior jungler Moon “Cuzz” Woo-chan.