Illusion Broken: A closer look at how Riot used AR to turn an empty room into the Worlds 2020 stage

“We were told, ‘Don’t go past here or you will fall off,'” said Denian. Despite the difficulty of holding the world’s largest esports tournament during the middle of a pandemic, Riot Games has done an excellent job with the League of Legends World Championship.

In previous years, the four stages of Worlds have been held in four different locations across the host country.

Worlds 2019 saw the majestic sights of Europe, with the Play-Ins held at the LEC Studio, the Group Stage at the Verti Music Hall, the Quarterfinals at the Palacio Vistalegre, and the Finals at the Accorhotels Arena. 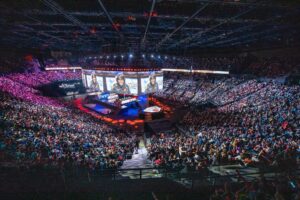 Despite being limited to only one location inside the Shanghai Media Tech Studio at Shanghai, China this year, Riot Games has upped the esports digital viewing experience by bringing fans an incredible stage with the help of Augmented Reality (AR) and Virtual Reality (VR).

From the walls to its floors, the location of the competition has been covered with gigantic LED screens:

When rendered with the right lighting and stunning visual designs, the final, live broadcasted scene looks like this:

The stage was made possible by AR specialists, Possible Productions, who used the latest version of the software Unreal Engine (popularly used by games like Fortnite and Street Fighter V) to create powerful visual effects that seem too real to be computer-generated imagery. These effects are then displayed on the LED walls and floors to create the perfect set for Worlds 2020.

The Worlds 2020 stage tells the story of taking over and reaching new heights as the competition gets tougher. In the first stage, the Play-Ins, we saw a mysterious girl who appears to have the power to rearrange blocks to create a stage that literally took her to another level. What’s more impressive is that no green screens were used in the opening according to Head of Riot Music Group Toa Dunn.

This particular stage is known internally among Riot production staff as “Earth” and it features a virtual version of the majestic Shanghai skyline at night complete from the Jin Mao tower to the Oriental Pearl TV tower.

While it may look grand on livestream, for the players on stage, they can’t actually see what’s going on.

“We just see blurry images,” explained Legacy Esports’ head coach James “Denian” Goddard. “You can barely tell what they are.”

“You can see Jhin on the wall at the back when he’s picked, you can recognize it but also he’s just a blurry boy.”

All participants, players, and coaches were also instructed by the floor director on which areas and part of the stage works onscreen.

“They just say this is about as far as you should go,” said Denian. “I don’t think any of the instructions were specific to the 3D except for ‘Don’t go past here or you will fall off and it will break the illusion.'”

With the combination of AR, VR, and the power of pre-made graphics, Global Head of Communications David Higdon claimed that this is the first time this technology is being used in live, multi-camera production.

With real-time rendering, 32K resolution, and 60 frames per second, this mixed-reality hardware system has already been used in Disney+’s TV series The Mandalorian.

Moving on to the Group Stage, we see the same girl taking an elevator which brings her higher than the iconic Shanghai buildings. She uses her powers to make a stage out of the rain and lightning, which brings us to a venue filled with clouds. We’re still seeing the same room, but now we can see a whole new level that plays differently from the stage we saw during the Play-Ins.

Of course since this is the first time that the world is seeing this kind of event setup, there’s bound to be some slip-ups and oversights.

Another error that happened during the Group Stage was G2 Esports suddenly “disappearing” on the screen, which seems to be an AR mishap.

With the Worlds Finals fast approaching this October 31, Riot has so much more in store for its viewers. We’re curious to see what designs they have for the Quarterfinals and the Finals. How will Riot Games play with the never-before-used Pudong Football Stadium for the conclusion of its tenth Worlds season?

Like its previous opening ceremonies, the Finals stage will surely present another world-class act. Fans should expect the debut of virtual girl group K/DA featuring Seraphine and the live performance of Take Over in a never-before-seen technology.