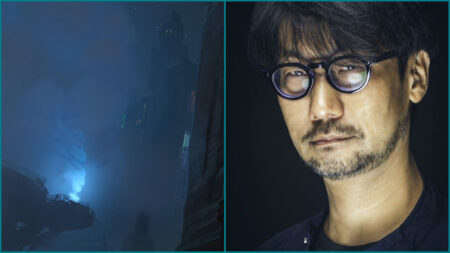 After watching the first four episodes, legendary game designer and director Hideo Kojima compared League of Legends Arcane to other highly-rated animated titles like “Spider-Man: Into the Spider-Verse” and “Love Death + Robots”.

He even went as far as saying that Riot Games and Netflix’s original animated series is “the future of animation and CG”.

Since completing the series, Hideo Kojima went on Twitter to share which scene he thought was the best in Arcane, and which song in the soundtrack he’s got on repeat.

Even though Hideo Kojima believes there are “many great scenes” in Arcane, one in particular stood out to him.

Taking screenshots of Act 2 Episode 6: “When These Walls Come Tumbling Down”, he is referring to the scene where Jinx holds a lighted blue flare on top of an open tower, one of the highest points in Zaun, in hopes that Vi will find her.

Just before this scene, Jinx had found out that Silco lied about Vi, that she was alive all along but that no one told her. During this powerful shot, Woodkid’s “Guns for Hire” plays, which Hideo Kojima describes as “violent, lyrical, and artistic”.

“It’s what I would call a divine scene. It’s a great song!” he wrote. “I’ve been watching and listening to the ending credits of Episode 6 over and over again.”

This blue flare was given to her by her sister when they were still kids, when she was still Powder in Act 1 Episode 3: “The Base Violence Necessary for Change”.

Entrapped in the basement, Vi saw Benzo get ripped to shreds by Silco’s Shimmer-empowered man, and Vander, kidnapped. After Ekko rescues her, she returns to Mylo, Claggor, and Powder, and they make a decision to save Vander — without Powder because “it’s too dangerous”.

Leaving the flare with Powder, Vi said, “Where ever you are, light it up, and I’ll find you, I promise.”

Act 2 Episode 6 comes full circle when Jinx lights it up, and Vi does indeed come for her, fulfilling her promise, marking their first reunion in years… not without a few complications, of course.

Guns for Hire is performed by artiste Woodkid, and was written and produced by Alex Seaver of Mako.