It’s time to suit up for summer! 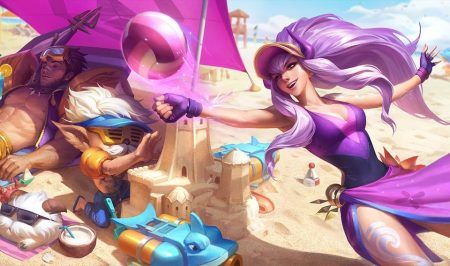 Riot Games’ Pool Party skin line, where champions dress in summertime beach clothing, has been one of the most popular in the League of Legends universe. This summer, five new champions will join the line up.

Two days ago, a short 20-second teaser was released, showing only the legs of these new champions which left fans guessing.

The most obvious is Orianna’s robot limbs on the far left. The shape of the umbrella head next to her is also indicative of Jarvan’s spear.

Looking at the beach paraphernalia lying in the water, other guesses included Corki, Ahri and Neeko.

These skins and their chromas have hit PBE for testing — and they do not disappoint.

Turns out the surfboard and blue whale float in the teaser belong to Taliyah and Orianna.

Besides new water animations for all their abilities, Pool Party Taliyah’s Seismic Shove stands out because it props up a rock with colorful coral.

He may be old but he sure knows how to throw a party.

Perhaps the coolest animation of them all is Jarvan’s Cataclysm, which has morphed into a sandcastle!

A brilliant re-imagination of his skills, Pool Party Jarvan has a completely different feel compared to the rest of his skins, which reek of a proud and noble Demacia royalty.

We wonder what his father will say about the prince’s new choice of summer activities.