Here’s everything you need to know about the reworked Volibear

When the thunder roars, you’ll know his name. Riot Games unveiled Volibear’s reworked appearance, lore, abilities, and skins today. The update realizes the developers’ vision of a “lightning-fueled demigod of the Freljord” for League of Legends’s spirit bear champion, which was teased last May.

Through a 30-minute live stream, Riot presented a unique style of giving Summoners a first look at LoL’s latest reworked champion. The stream alternated gameplay clips and concept art with an animated background of snowy mountains every 30 seconds or so.

A humongous Volibear appeared toward the end of the stream, providing fans with an exciting closer look at his new form.

Here’s a breakdown of everything we learned from Riot’s latest big reveal:

Volibear’s updated look gives him a wilder and and more menacing profile, with his heavy silver armor having been removed from both his default splash art and in-game models.

The Thousand-Pierced Bear’s pure white mane is more evident than ever before, partnered with a pair of dangling braids that are reminiscent of Ornn‘s shorter locks.

Volibear now has glowing symbols tattooed over his left eye and on both his arms. He also has what appears to be icicles growing on his back and near his claws.

Aside from getting attack speed from his abilities, Volibear now deals bonus magic damage to nearby enemies with the use of his basic attacks.

His ability to rapidly regenerate health is now gone, but it has been replaced by a passive that can help Summoners be more aggressive in team fights.

Similar to his previous Rolling Thunder ability, Q grants Volibear speed when approaching opponents. The first enemy he attacks becomes stunned instead of just being rooted briefly. Riot also removed the part of this ability where he flings the target towards his direction.

Volibear’s second ability Frenzy has been upgraded to Frenzied Maul. Using W, he will be able to mark enemies instead of gaining stacks from his basic attacks. Re-casting this ability on the marked enemy champion will deal bonus damage and heal Volibear at the same time.

This ground-targeted area of effect calls forth a bolt of lightning that will strike the ground and damage and slow down enemies. Unlike his Majestic Roar, Sky Splitter grants Volibear a shield if he is inside the blast radius.

Instead of letting out bolts of chain lightning and dealing damage, Volibear’s reworked ultimate now offers more crowd control. With Stormbringer, Volibear leaps to a specific location while slowing down and damaging enemies beneath him. He also gains bonus health during the leap. Casting R also affects nearby enemy towers, temporarily disabling them upon the bear’s landing. 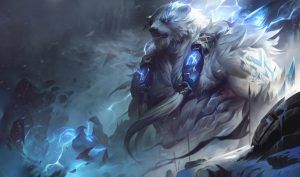 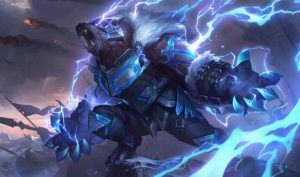 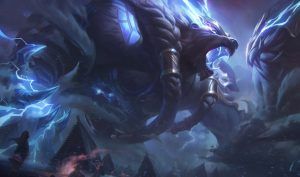 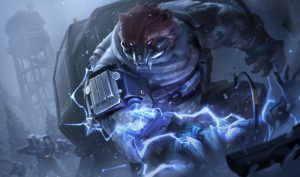 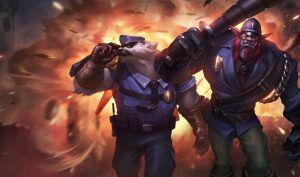 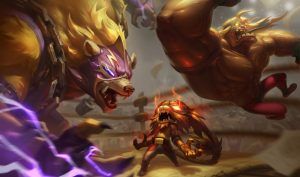 All six of Volibear’s skins have new splash art, including his base skins and the legacy skin Northern-Storm.

Previously known as the Thunder’s Roar, Volibear’s image has been rebranded as the Relentless Storm for a good reason. His updated lore reveals that he is an all-powerful demi-god who formed vast lands, valleys, fjords, and rivers by defeating the magma-serpent Rhond.

Volibear’s story now includes his brother Ornn, the demi-god of the forge, as well as an explanation of how he came to blind the Ice Witch Lissandra.

Now, he is an angry being determined to bring down all of Freljord’s modern advancements and bring back its ancient ways which would give people power through “true wilderness.”

The end of the 30-minute stream introduced the Volibear All Random, All Mid (ARAM) event, where Summoners can bag this exclusive emote for “braving the storm.”

Players just need to queue in for a couple of rounds of All Random, All Mid starting today until May 12 to obtain the emote.

Here is the full schedule of the four-day event:

A summary of the Volibear live stream reveal can be viewed here: