The GSW-operated org trusts the process. 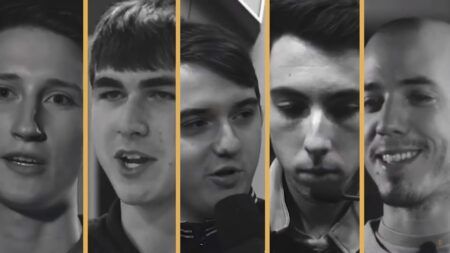 Week 3 of the League of Legends Championship Series featured an incredible upset by the developmental roster of Golden Guardians.

A grudge match between GG’s past and present rosters, the fresh five-man squad had something to prove.

The game was a test of patience, with both teams barely making any substantial trades in the early game. Holding a 1-7 record, GG knew that this game would make or break the second half of the season for them.

By mid game, the young GG squad rallied around Ablazeolive and his rotations. With Tristana’s waveclear, Ablazeolive took control of the mid lane against Damonte’s Orianna, and rotated to other lanes for kills and gold.

In the late game, in an effort to distract 100T from taking the Baron, Niles’ Gragas and Ethan “Iconic” Wilkinson’s Lillia charged into Ssumday’s flanking Aatrox.

Even though it started off with a one-for-one trade, the Lillia player managed to pull off a Watch Out! Eep! with stasis combo to hand over three more kills and a free Baron to the two ADCs.

Both sides were going back and forth in kills, but Golden Guardians had the better waveclear and split-push with Sivir and Tristana, who eventually downed all three inhibitor turrets. This significantly hampered 100T’s offense.

Despite locking down Infernal soul and the Baron buff, GG lacked the ability and knowledge to take charge and close things out. They had no solid initiators in their draft, so the squad was forced to reset after every skirmish.

At this point, 100T could only make a comeback if they managed to take Baron or the Elder Dragon. Ablazeolive and his squad did their best to control those win conditions by camping out the river.

After GG caught out a badly positioned Huhi, they utilized the 4v5 advantage to start Elder. Instead of rushing it down for a 50-50, GG got ready to respond to any Hail Mary moves 100T might make.

As FBI and Ssumday desperately dove in to meet their demise in the river, Iconic secured the Elder Dragon, and th remaining GG members rushed the undermanned Nexus for the win.

The triumphant win over top guns 100 Thieves might just be the second win for Golden Guardians this split, but Ablazeolive expressed that he’s more than grateful to be playing in a developmental roster in the LCS.

“Maybe the results aren’t coming immediately, but as long as we can tell that we’re improving, I will be confident going in,” said Ablazeolive.

With the game witnessing three Elder Dragons and four Barons and lasting 56 minutes and 23 seconds, this GG win currently holds the record for the longest game of 2021 LCS.

Golden Guardians ends the first round robin with a record of 2-7 and will go on to face league leaders Cloud9 on February 27.

READ MORE: 100 Thieves have finally given Ssumday the supporting cast he deserves