GALA was great, but hear me out, Ming was the real LPL Spring Final MVP

Give more love to supports! 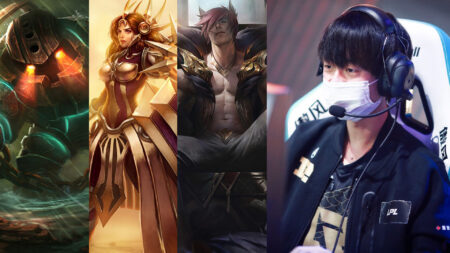 Even though Royal Never Give Up dropped game one in their series against FunPlus Phoenix in the the 2021 LPL Spring final, they stayed true to their name, got back up, and turned the series around for a 3-1 win.

With the organization since 2017, Royal Never Give Up’s long-time support Shi “Ming” Sen-Ming earned his fourth domestic title — this time, with a different bot laner.

Chen “GALA” Wei joined Royal Never Give Up in June last year. Since then he has grown, and was noticeably a better AD carry in the 2021 season. Putting on a great performance in this final, he was awarded the FMVP.

Yet, behind every successful AD carry is a strong support. They dictate the lane, peel for their bot laner, and sometimes sacrifice their lives so that their carry may live.

Despite competing professionally for six years from the LDL to the LPL, and being one of the older brothers on the squad, Ming’s performance at the final is one of his best — if not the best — in recent years. In fact, I strongly believe that he deserved the Final MVP trophy, and here’s why:

1. Ming’s mechanics and laning were incredible

Despite the outcome, there’s no denying that Royal Never Give Up opened the series strong. When Yan “Wei” Yang-Wei’s Hecarim paid his first visit to bot lane, it was entirely Ming’s Nautilus who set up and executed the successful gank. Look at that deceiving hitbox on the hook!

In fact, both Ming and GALA ended game one with the same Kill Participation at 71.4%, showing just how tight they are. Ming’s KP also exceeded that of his counterpart Liu “Crisp” Qing-Song’s Galio (47.4%) despite the loss.

Proving again that they were the better duo in the final, game three’s exciting 2v2 bot lane action required both Ming and GALA to play it out perfectly.

Saving his crowd control, Ming’s Leona first used Shield of Daybreak’s stun on Crisp’s Rell so that his AD carry could get out of immediate danger. Only after Lin “Lwx” Wei-Xiang’s Tristana jump did he cast Zenith Blade to root both enemies.

Without hesitation, Ming flashed after Lwx, and placed himself in between the enemy bot laners and his vulnerable AD carry. This split decision not only helped out GALA, but also allowed Ming to weave in basic attacks so that they could finish off the kills.

The most behind Royal Never Give Up found themselves was in a crucial game two. If they lost a second game in a row to FunPlus Phoenix, it would’ve been much harder to come back.

Finding himself in the same matchup again, Li “Xiaohu” Yuan-Hao’s Jayce had almost half the CS of Jang “Nuguri” Ha-gwon’s Irelia. Down two deaths just four minutes into the game, not even Wei ganking top could help.

For a start, Ming rotated to set up a gank mid with Yuan “Cryin” Cheng-Wei’s Ryze and Wei’s Hecarim. Investing his own Flash to chain crowd control Kim “Doinb” Tae-sang’s Viktor, he even landed a pixel perfect hook to secure the kill.

Next, within a span of three minutes, Ming went top twice. First as a four-man pack, and then to set up a 3v3 that FunPlus Phoenix were completely unprepared for.

Working with his team, they relieved pressure on Xiaohu, allowing him space to farm, while also putting Cryin’s Ryze ahead. So even though Royal Never Give Up were down in kills and gold, they came back in game two to even out the series, swinging the momentum in their favor.

3. Ming consistently set up and peeled for GALA in team fights

Whether Ming was on Nautilus, Leona, or Sett, he was there to initiate for his team, and also peel back for his AD carry.

It was Ming from the flank who first saw the opportunity to catch Doinb’s Akali with Solar Flare. Even though FunPlus Phoenix nearly turned the fight around thanks to a well-timed Zhonya’s Hourglass, watch Ming’s positioning throughout the exchange.

Hanging around the backline with GALA, Ming casted a clutch Shield of Daybreak stun onto Nuguri’s Jayce to stop him in his tracks. This kept GALA alive and allowed Icathian Rain to finish the job.

As GALA continued to intelligently reposition on Kai’Sa with a just a sliver of health, a final Eclipse and basic attacks from from Ming added bonus damage to the remaining targets, aiding in the ace.

In game four, even though Ming was on another initiator, he was always looking out for GALA. Finding the opportunity to cast The Show Stopper on one target into two, watch Ming tend towards GALA throughout.

His mere presence, constant repositioning, and clean communication with his bot laner was more than enough for both of them to play through this successful skirmish that tipped the last and final game entirely in Royal Never Give Up’s favor.

In the post-game championship interview, LPL’s host asked, “Last year was not a very smooth year for Royal Never Give Up. What made RNG so strong and get such a good result this split?”

“I think we didn’t have much pressure, and we just played normally. That’s why we had a very good performance,” Ming replied.

For supports, it’s never about the kills. It is always about the team, it is always about the AD carry. Sometimes, in the rare occasion that supports play a mage bot, or pull off gaming-winning engages, they receive the MVP. But most of the time, it is the small things like crowd control, positioning, and presence — which can’t even be quantified — that makes a big difference.

So for all that Ming did for GALA and his team in the grand final, he gets my vote for FMVP.