The South Korean squad just couldn’t figure out how to beat the European powerhouses. 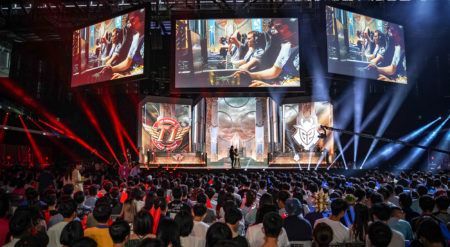 European squad, G2 Esports, had to dig deep today to come out victorious against hot favorites SKT T1 in a back and forth five-game series at the League of Legends Mid-Season Invitational 2019.

SKT T1 took the first game easily, but found the second a lot harder as G2 started to find their stride. With the series tied 1-1, Kim “Clid” Tae-min carried SKT T1 to victory in the third game, putting his team just one win away from the finals. But G2 wouldn’t go down easily and managed to even the series again, forcing a deciding Game 5.

In Game 5, G2 had a fantastic start and a commanding lead, but SKT fought back in style, taking team fights that no one expected them to win. However, G2 managed to recover, catching SKT out of position in a crucial Baron fight, before rushing down the bottom lane to finish off the Nexus.

SKT T1 Mid-laner Lee “Faker” Sang-hyeok made amazing plays all day, but the whole team made mistakes against its European opponents, who capitalized on them in brutal fashion.

With the win, G2 Esports sets up a historic North America vs Europe finals against Team Liquid, who stunned defending Worlds Champion Invictus Gaming yesterday to book their spot.

For Faker, the defeat only means he will bounce back stronger.

“I think [G2’s] Cap played very well in this series and make very little mistakes, but the next time we meet up I will definitely beat him” said Faker.

The midlaner also added that while the meta has shifted to favor more aggressive plays, his team still favors a more balanced approach.

“The newer mechanics for Champions encourage more fighting and reward more aggressive plays, but we didn’t try to follow the other teams and we will do what we do best.”

G2 Esports midlaner Rasmus “Caps” Winther thanked his dad for supporting him and attending all of his tournaments, pointed out that he got the crowd to cheer for them even when they were down 1-2 in the series. He also highlighted that he really wanted to play against Faker.

“Unfortunately, it’s not one-on-one, most of games, there’s a lot of roaming and teamfighting, it’s more like me against SKT,” said Caps.

“A lot of teams treat Liquid like a Platinum team but we are going to treat them like a Diamond team,” said Caps as the whole team burst out laughing (Diamond is a tier lower).

Here’s how the epic best-of-five went down.

SKT T1 got off to a great start, with Park “Teddy” Jin-seong’s Ezreal taking first blood. SKT were ahead 4-0 in the kill count in the first seven minutes, and by the 10-minute mark, had already amassed a 3,000 gold lead.

By the 16-minute mark, SKT was in a dominant position, with a 6,000 gold lead despite the low 5-2 kill count. G2’s Sona and Taric combo picks, which were meant to sustain the laning phrase and scale well into the late game didn’t actually pan out, and SKT completely took over the map. 20 minutes in, Teddy secures an Ace, while G2 manages to take two in return, including Faker’s Lissandra, but it was too little, too late.

A fight at G2’s base saw Cho “Mata” Se-hyeong ending it with another Ace, and the first game finished at 24 minutes with a 16-6 kill count.

The second match of the series started hot and furious, with G2 taking first blood five minutes in, but SKT managed to claw one back.

Despite the stomp in the first game, G2 made adjustments, performing much better, and took a kill lead 4-3 and a 2,000 gold lead in the early game. Top laner Martin “Wunder” Hansen’s Irelia dived in and got a kill off, but almost fell in return, but thanks to the quick reactions of his team mates, managed to get away with murder.

Unfortunately, server issues resulted in a lengthy pause, and when the game restarted, G2 started making misplays, with mid laner Caps over-extending on his Morganna and getting ganked by four SKT members while Faker on Lissandra teleported in behind to flank the retreating G2 squad.

Starting strong this time was SKT, who looked dominant the entire game. SKT took first blood at the three-minute mark thanks to Faker on Sylas rotating from mid, but G2 got a return kill. Clid’s Rek’Sai later rotated to mid to try to kill Caps on Azir, but G2’s own jungler Marcin “Jankos” Jankowski’s Jarvan IV came in to try to save him. Clid did manage to finish off Caps but Faker then rotated in to finish off Jankos as well for a 2,000 gold lead.

However, despite the good start, SKT found themselves evenly matched against G2 as they managed to secure three kills in the next team fight, including Faker’s. However, SKT continued to push on, playing methodically and building on their lead. Clid carried the game with eight kills and only one death, steadily picking off G2 members who were out of position on his Rek’Sai.

A big team fight broke out at the 28-minute mark and Teddy’s Varus managed to score an Ace off G2. While G2 tried to hold them off for a few more minutes, SKT’s overwhelming advantage let them finish off the Nexus while G2 was outside their base.

With one more game to go, SKT looked to finish off G2 and take the series, but alas, that was not to be. G2 took first blood, but a long-distance Ashe Enchanted Crystal Arrow caught Luka “Perkz” Perković’s Varus mid-teleport and a Tahm Kench flank finished him off.

However, a big team fight around the 11-minute mark saw G2 pick off Faker’s Sylas and Clid’s Rek’Sai, letting G2 take the Dragon. G2 later found another two kills on the top lane, but lost the middle turret in the process, but it was well worth it for the European side.

Faker’s Sylas made an incredible play at 19 minutes, stealing Nar’s Ultimate and catching out the whole G2 squad. It didn’t win them the game, but did allow them to catch up to G2’s lead.

G2 decided to play sneaky, and as SKT went to take out Baron, Cap’s Ryse and Wunder’s Gnar tried to break down SKT’s Nexus. However, quick reactions from SKT let them take out Wunder.

SKT, somewhat overconfident with the Baron buff, got blindsided by G2 pushing into their base again to finish off their Nexus, tying the series and forcing a Game 5.

If you thought the fourth game was insane, Game 5 will have you right at the edge of your seat. G2 was dominant right from the start, taking the gold lead and winning the early fights, with Wunder’s Pyke doing insanely well, getting four kills and zero deaths early on.

However, with their tournament life on the line, SKT wasn’t about to give up, and fought back with perfectly executed team fights, surprising G2 in a choke point and taking out the entire G2 squad while only losing two.

However, G2’s lead continued to build and it was a fateful Baron encounter with SKT losing three and Faker’s LeBlanc and Kim “Khan” Dong-ha’s Kennen getting picked off by Wunder’s Pyke while retreating that lead to a team wipe.

That, however, was just the beginning. G2 finished off the almost dead Baron, and with Mihael “Mikyx“Mehle and Wunder already in the base, the Baron buff allowed them to finish off the Nexus before SKT could do anything.